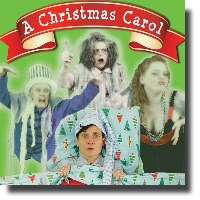 Yes, it is a night of terrific entertainment. This is definitely a fun show to take in at Christmas (for adults).

Our usher greets us at the door while wearing a pair of red reindeer antlers. Now this gives me the feeling that a wonderful comedy is about to begin.

Eleanor S. Crooge (Jingo), the boss of a yoga clothing company, refuses to admit she is gay until the ghosts of Christmas begin to haunt her in her home as she tries to sleep. All sorts of antics are constantly taking place around the office water cooler with her all gay and lesbian staff. Since it is Christmas time, the cooler has now been spiked with alcohol. Tina Timmins (Andree Morgan), a high school student, tries to get Crooge to donate to her Gay’s Straight Alliance but of course, Crooge refuses.

The opening scene is with Sean (Leigh Burrows), a gay employee with a pencil thin moustache and a wonderfully animated personality. He is often seen spiking the water cooler.

The first ghost to visit is Crooge’s old partner Marley (Eroca Zales) who has been dead for ten years. She appears wearing a truly ghostly attire with chains, light grey hair, and she screams a loud and eerie wail. Zales made a powerful ghost and her performance is funny and amazing.

A Christmas Carol in Gay Apparel keeps the audience laughing throughout the entire performance. The play is packed full of entertainment, and because it is so well done, the evening flies by and before we know it, it’s time to go. The lighting and sound effects are a big part of the show. Burrows, Kemp and White do a splendid job convincing us that we are flying through the air with Crooge as she visits a new scene with each ghost - the ghosts of past, present and future, of course

The play is well written, the lines are funny, the costumes well designed, and the sound and stage lighting are professional. The whole cast should be proud of themselves. They did what many great actors sometimes fail to do, and that is, to create comedy that makes an entire audience laugh continually throughout an entire evening.

Bravo and Happy Holidays to all of you!