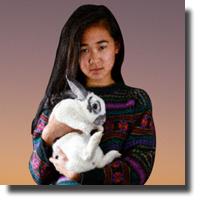 Sitting on one of the hard canteen chairs spread unevenly around the wall of a large room, but tiny theatre space, it was difficult to determine just where the staging ended and where the audience seating space began. Skylight Gallery, in the middle of Vancouver’s Chinatown, is kind of ground zero for the Vancouver theatre community. There is an expectancy of witnessing a raw, gritty mounting of Paul Zindel's Pulitzer Prize-winning domestic drama, The Effect of Gamma Rays on Man-in-the-Moon Marigolds. The eleven word flowery title actually refers to the youngest character’s school science project – a subtext to the play’s main theme of auto disenfranchisement.

Mrs. Hunsdorfer (Laara Ong), a disfunctional divorced mother of two teen-age high school girls is a total mess. You easily feel sorry for the two girls, but it’s difficult to feel any sympathy for their mother, because her predicament seems to be of her own making. As the narcissistic, chronically depressive mother, Laara Ong delivers a near perfect balance between viciousness and vulnerability. She considers herself to be trapped in “a half-life,” unceasingly blaming everyone else for her lamentable state.

In less capable hands, Laara Ong’s character could easily become a theatrical cliché. Only ever referring to herself as Mrs. Hunsdorfer (her given name is never stated and the programme doesn’t help), she gives up a lot of dialogue, often when there is no one in particular on the other side of the conversation.

Ruth (Lissa Neptuna) and Matilda (Julie Leung) are the adolescent daughters. Ruth is a ructious young woman who earns cigarettes from scratching her mother’s back, and may or may not wind up following her mother's failed footsteps. Matilda is more acquiescent and introverted. She is frequently rewarded by teachers (much to her mother’s chagrin), but less popular with other students.

The (almost) entirely Asian cast acquit themselves well. The cast includes a cameo from emerging talent Anais West as Matilda’s rival in one of the play’s lighter moments, and a real live rabbit (Marsha) confined to a box for most of the show’s two-hour run time.

Paul Zindel's writing is a pretty bleak observation of the effect of selfish parenting. Mrs. Hunsdorfer puts her own deluded dreams of opening a local tearoom ahead of the academic success of her children. Zindel does leave gaps in his otherwise compelling play. What is the relationship between the verbally abused Nanny and the family?

Gamma Rays is at times both vacuous and cogent, much like the protagonist herself.