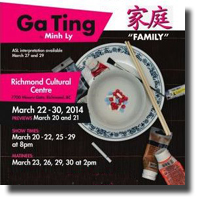 Ga Ting (English translation: Family) is Minh Ly’s three-handed, single act, cross cultural drama whose central character is neither seen nor heard. Set in Toronto in roughly present time, the storyline revolves around Kevin Lee, a young Asian gay man from a traditional Chinese-Canadian family. He has recently died from a drug overdose in Vancouver, so his gay partner Matthew (Michael Antonakos) travels to Toronto to meet the bereaved parents, Hong and Mei Lee (BC Lee and Alannah Ong). The Lees didn’t know their son was gay, nor did they really understand about his depression, a result of his bipolar affective disorder.

When Matthew arrives at the Lees home there is a predictable tension. The reception from Hong is measurably icy and it doesn’t help that Matthew brings a gift of a bamboo plant, causing mild annoyance to the older man. Mei is more open and is genuinely keen to hear what Matthew has to say about his relationship with her son.

It doesn’t take long for communications between Matthew and Hong to break down completely. Matthew can’t understand why Kevin’s parents are unable to accept their late son’s lifestyle, and Hong blames Matthew for “turning his son gay.”

Pivotal interactions between Kevin and his parents and Kevin and his partner are recalled in flashbacks. In one such recollection, Matthew agrees to enter a local talent contest at Kevin’s urging. His rendition of “Somewhere over the Rainbow” drew appreciation from Mei and indignation from Hong who recognised it as the unofficial gay anthem.

BC Lee as the cantankerous patriarch and Alannah Ong as his more forbearing wife deliver first-rate performances, skillfully switching between Cantonese when speaking to each other and English when talking to Matthew. Michael Antonakos does his best with what is arguably the more difficult role, although, he occasionally struggled playing against type.

Christopher David Gauthier made the most of the small theatre space with his well designed set of the Lees’ tastefully furnished apartment.

Putting on a bilingual play is always tricky, so kudos to director Rick Tae for pulling everything together and maintaining an even pace. It’s not perfect and may need some fine-tuning before the next mounting – and I hope there will be one. I found the opening scene depicting Kevin’s death as unnecessary and even confusing. Also, it was difficult to accept Matthew’s confrontational behaviour as a first-time dinner guest as natural. The expected conflict could be played out logically had the later exchanges been less over-the-top.