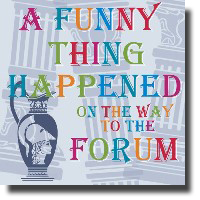 The Roman slave Pseudolus (Steve Dotto) comes up with a plan to secure his freedom, and that’s when the humour really gets rolling in A Funny Thing That Happened on the Way to the Forum. Pseudolus belongs to the domineering Domina (Helen Volkow) and her hen-pecked husband Senex (Raymond Hatton) who have a young son named Hero (Dann Wilhelm). Hero is in love with the girl next door who happens to be a courtesan named Philia (Rebekah MacEwan) owned by Marcus Lycus (Pat McDermott). Pseudolus convinces Hero he will secure Philia for Hero in exchange for freedom. So far so good.

Unfortunately for Hero, Marcus Lycus has already sold Philia to another hero, a Roman captain named Miles Gloriosus (Matt Loop). In need of a great idea, Pseudolus enlists the help of another slave in his household, the hapless, histrionic and altogether hilarious Hysterium (Ray Van Ieperen). Add Erronius (Dan Tribe) to the mix and you have a quest in search of a romance that narrowly avoids tragedy, all in the name of one of the funniest comedies to come out of Broadway in the mid-1960s.

Steve Dotto does not quite fully channel Zero Mostel who brought such zest and zany creativity to the lead role in the 1966 film version of this play, but his Pseudolus has an authentic rough-hewn feel to it that goes a long way to explaining the conversational singing style on Comedy Tonight, and most of his other musical numbers.

The play is in many ways patterned rather closely on the film, but under Ryan Mooney’s careful direction, Dann Wilhelm and Rebekah MacEwan develop much more chemistry than their filmic counterparts. Another indication of the director’s nuance that adds hilarity and colour to this production is the fun-filled finesse of the flourish of a salute given by the advance foot soldiers for Miles Gloriosus. These little touches add much more than mere laughs to an already laugh-laden script.

Pat McDermott manages to convey a kind of controlled concupiscent stage presence that stands confidently equipoised between an Ed Sullivan cum Glenn Frey style of showmanship. His charisma, and the canny comic timing of Steve Dotto and Ray Van Ieperen, along with the bodacious bounty of beauties represented by the courtesans of the Lycus harem make this one of the most eminently watchable musicals to be staged by the White Rock Players Club in a long while. Although it lacks the big band sound of the film, the three-part orchestra of Shelly Eckstein, Steven Johnson and Rob Philips did an admirable job with the musical accompaniment of this production.