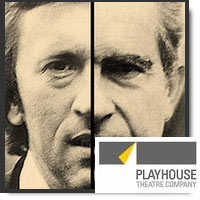 Frost/Nixon is a fascinating rewriting of a piece of media history. After Richard Nixon escaped impeachment for his nefarious involvement in the Watergate scandal he was approached by David Frost, a British television broadcaster, to give a series of interviews for the media. After much wheeling and dealing Nixon agreed to do this. His motivation was for an opportunity to justify himself to the public. Frost determined to make the show the trial the ex-president had evaded by his resignation and subsequent pardon by incoming president Gerald Ford.

This clever intelligent script takes the audience through these interviews, with Nixon evading the issue by lengthy, mundane, often irrelevant speeches. This sparring continues until finally Frost pins Nixon down to answering his questions factually.

The scenes are played out against a backdrop on which projections of actual events, and other scenes are shown. Necessary furniture is brought on to the bare stage as needed. The American supporters and staff of the ex-president are on one side of the stage and the Frost and his staff on the other.

The standard of speech and acting of the entire cast is outstanding and the staging impeccable in its clarity. As Nixon and Frost, Len Cariou and David Storch are contrasted in their approach to the battle of wits which ensues throughout the performance. Their timing, body language and demeanour are brilliantly understated.

The rest of the large cast all give performances of a remarkably high standard. As the opening show of the new Playhouse director’s season, this production bodes well for the immediate future. In all aspects, this is a memorable presentation in its high quality of script, performance and production. I am grateful for the privilege of witnessing this most successful opening night.