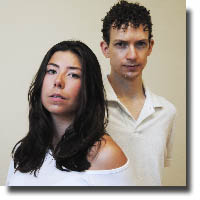 It has long been my suspicion that social workers and psychologists enter their professions more because they have issues of their own to work out than for any altruistic wish to serve others. It would appear that writer Jeff D’Hondt might agree, based on his first play, A False Face. The play, inspired by his own experiences as a social worker, follows a relationship between two social workers – one an addictions counselor, Jake, played by Cole Alvis, and the other a palliative care worker, Hunter, played by Madison Walsh. The play depicts a series of memories beginning when a chance meeting brings Jake and Hunter together; this connection evolves into a relationship of mutual challenge, boundless need, and reluctant revelation. The audience rides a see-saw as we witness first one, then the other, reveal the demons that are defeating them. It is a challenge to determine which character is more damaged, though it hardly matters, since they are both so far gone that finding even simple joys seems beyond their reach.

Ali Richardson clearly knew where she wanted to subtly take these characters, and Alvis and Walsh are great as they take us on a dark journey into Jake and Hunter’s fears and insecurities. Throughout it all, however, they effectively project a sense of hope in the doomed relationship – hope that is as deep as their pain. Alvis and Walsh treat the audience to many moments of fine and convincing acting.

I would like to see this play performed in a venue, and with a budget that is worthy of the value of the writing, direction, sound and acting that I experienced. Having the actors change the too simple sets and costumes, in order for the play to move on, bled away some of the emotion, suspense, and continuity that are inherent in the fine writing, direction and performance of A False Face.

I do recommend this play. I think you’ll be impressed by the thoughtful script and good acting.
And it’ll set you thinking.