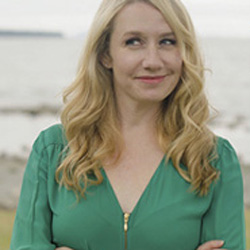 Leanne (Leanne Kuzminski) is a slim, attractive, thirty-something blonde who is looking for that special relationship. She’s not expecting to meet Prince Charming, just someone with secure employment, who doesn’t live with his parents and okay, good looks wouldn’t hurt. Since opportunities of meeting anyone are limited at work and in her present social circles, so why not try online dating?

Leanne’s foray into the unpredictable and often frustrating world of dating by way of the internet is a cautionary tale. Supported and (mis)guided by her gal pals (all played with varying dedication by Chelsea McCooney), she sets off optimistically (at first) on a dozen disappointing dates, all played with amazing versatility by Josh Murdoch.

The lively comedy comes about by virtue of the exaggerated characters that Leanne meets on her bad dates. A positive element though, is that she establishes some useful guidelines for anyone who might want to follow her down that dark tunnel of internet match-making. 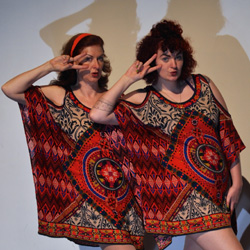 I Have My Own Steps Mom

The show is advertized as a Sisson Sisters act, but as the title suggests, Lindy (Mom) and Cydney Eva are mother and daughter. The show is an odd mash-up of burlesque, free style dance, storytelling and a tribute to late family patriarch Hal Sisson.

It starts with Lindi performing a quirky reverse striptease, where she enters the stage (almost) naked and commences to add clothing. This launches the pair into a mildly amusing sketch comedy routine where Lindy plays the role of a cop and Cydney Eva tries to get arrested. The storytelling, shared roughly even between both performers is interspersed with projected 8mm family archival film footage.

Lindy and Cydney Eva are natural artists that share a genuine chemistry. It’s tough to be critical of something that is so obviously a labour of love, but the show relies too heavily on dialogue that at times tends to be rather aimless.

Harold (Hal) Sisson was a lawyer, social activist, acclaimed author, humourist and co-founder of Peace Players. After his retirement he penned 11 books including humour novels, murder mysteries, and an anthology of burlesque skits. One of his books, Modus Operandi, about the September 11 attacks in which he speculated on "what really happened to the World Trade Centre buildings.” Hal believed you must live your dreams - for your own sake and that of society – who could argue with that? 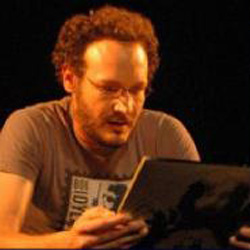 Zepplin was a Cover Band

If you are a rock music aficionado chances are that you will already be cognizant of much of the information that music historian Stéfan Cédilot imparts to his audience. Nonetheless, Cédilot doesn’t just pass down a bunch of dry facts that only he is interested in. Although, he does possess an “encyclopedic knowledge” – a term he uses frequently in regard to Jimmy Page.

Cédilot makes the Led Zeppelin lead guitarist a prime mover in his seminar styled theatrical infotainment. It’s not coincidental that all the music the audience hears while entering the theatre is by the Yardbirds – Page’s first band. As Cédilot tells it, it was Page as the last man standing when the Yardbirds split up, that formed the New Yardbirds to tour Scandanavia. The band’s personnel included Robert Plant, John Paul Jones, John Bonham as well as Page himself that became a kind of prototype for Led Zeppelin.

Cédilot makes the case that while the term “cover band’ may be exaggerated, the band, and Jimmy Page in particular gleaned much of their material which have since become rock classics from fragments of early delta blues. It is easy to see where Cédilot’s story has merit. He has a deep understanding of the band’s roots in folk and blues and presents convincing evidence of how and where these famous British rock merchants adapted and reconstructed many of their greatest songs.

Cédilot only mentions in passing the band’s recent legal squabble with California band Spirit and the latter’s claim of copyright infringement over a chord progression in “Stairway to Heaven.”

In support of his essentially dialogue driven show, Cédilot plays selected excerpts from his collection of Led Zeppelin vinyl LPs. Perhaps not as electrifying as blaring through Marshall loudspeaker stacks, but it did present a fleeting look into the creative (and re-creative) process. 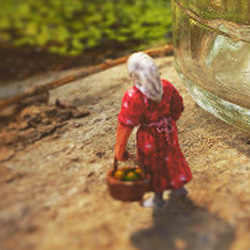 Actor and former Ballet BC dancer John Grady might be better known for his performances with the Blue Man Group. In this show, designed for a smaller audience, Grady is not so much concerned about a particular ‘Old Woman’ as he is about the inescapable repercussions of aging when it’s impossible to do it gracefully. Sure, most of us are going to get to this place someday, but we would prefer not give it too much air time.

In this poignant and bittersweet show, Grady recounts the true life story of his mother’s slow journey into dementia. He confronts the inconvenient truth of getting old, and at the same time attempting to come to terms with his own mortality.

Grady has a rather unique way of storytelling. He delivers his monologue at what seems like the speed of light, then takes long pauses as if giving our brains time to catch up. He occasionally departs from his essential theme to offer a thoughtful anecdote. One such subtext is a story about an ungrateful old lady who pushes a generous faerie too far.

Grady concludes the narrative with a transition from low impact exercise sitting in a chair to exquisitely performed interpretative dance. 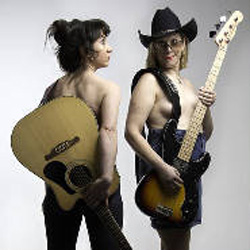 Bluegrass without the Banjo! Mattie and Maybelle’s (Donna Kay Yarborough & Sadie Bowman) shtick is pretty obvious from the title of the show: a once famous country music duo that twenty years ago played stadiums are now on a comeback tour. Their shtick which is mostly made up of country style songs about everything from cheating spouses to a (hopefully fictional) one-sided relationship with Lyle Lovett.

The pair have based the entire show on two very likable, though morally suspect, characters that deliver their music with pleasing melodies and smart lyrics. Their sister act is so authentic that audiences readily accept them as real. The dozen or so self-penned songs in their performance have lyrics that buzz with stinging satire. Titles like “American Lovers,” “Woodpecker Song,” “Seven seconds, too Short a Ride” and a “contractual obligatory” two minute ditty “Good Communications” will make you chuckle, but just might make your grandmother blush.

The gals end the show with a surprising costume change and a conventional pop song entitled “Good Old Days.” 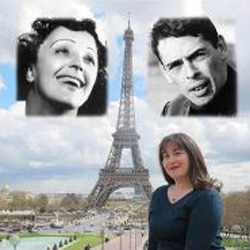 Piaf and Brel: The Impossible Concerts

Gall is on a self-proclaimed mission to preserve once popular songs that she feels could disappear from the public psyche. However, in the case of most of the songs she features in this show, there doesn’t seem to be any immediate concern. Gall intersperses the songs with engaging anecdotes about her subject’s careers and her own personal experiences.

Dressed in a ‘Piaf-styled’ black dress and post office red shoes, Melanie Gall is already standing at a microphone when the theatre lights come up. She bursts straight into a rendition of “Milord” – a song made famous by Édith Piaf that recounts the feelings of a lower-class French girl who has feeling for an upper-class foreign traveller.
Not surprisingly, Gall generally does better in her treatment of Piaf’s songs than with Brel’s.The exception is with Brel’s “Amsterdam” which she delivered in both English and French. Piaf herself recorded the song; its compelling melancholic tone may have been better suited to her voice.

Why Impossible Concerts? While Piaf and Brel lives overlapped, their careers did not. Piaf’s career was descending when Brel’s was just starting so they never appeared together at the same venue.