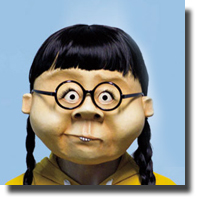 Wonderheads
The Middle of Everywhere

Remember Grim and Fischer? Well, Kate Braidwood, Emily Windler and Andrew Phoenix, collectively known as Wonderheads are back at the Fringe. The Oregon based mime artists with expressionless countenances and brilliantly delineating bodies have a new show, In The Middle of Everywhere, we meet Winston a Mr. Everyman who doesn’t like to be taken out of his comfort zone and Penny, a slightly neurotic pre-teen who is running away from home.

Together, they come across a time-machine in the form of an old transistor radio that routes them on a helter-skelter cosmic sojourn. The Middle of Everywhere is a family-friendly show that works on a number of different levels. Polished physical acting with absolutely no dialogue, though Wonderheads does use music and an occasional off-stage narrative. Braidwood and Windler are so good at emotive interpretation that audiences can’t help in engaging with the characters and even taken to shouting out guidance.

Andrew Phoenix joins the fun halfway through dressed as a yeti, eventually going home with Penny. 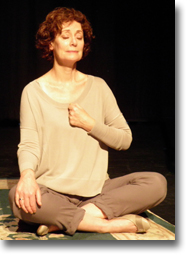 Going On Productions
Going On by Elizabeth Richardson

Going On is Elizabeth Richardson’s autobiographical one-woman show. Its dual central themes are her career in theatre and her eventual conversion to Buddhism. Perfectly paced at around sixty minutes in duration, it juxtaposes her life as an aspiring actress in the seventies with her recent calling as a Buddhist-in-training on a three-year retreat in Cape Breton.

Still slim and attractive in her mid-fifties with curly brown hair, Richardson looks every bit a Checkov heroine. But like every understudy, who longed to take over one of the roles she had zealously prepared for, she developed severe stage fright when it actually happened. Richardson goes into some detail about the theatre tour with Peter O’Toole (yes, Lawrence of Arabia – that Peter O’Toole), even enacting large chunks of dialogue from Checkov’s Uncle Vanya and Noel Coward’s Present Laughter.

During the course of her performance, Richardson plays all the roles, both male and female, overplaying some (like O’Toole) and underplaying others. The most poignant scenes are the two-sided conversations with her mother, who supported her career as an actor, but was confused by her foray into Buddhism.

You have half dozen opportunities to hear Elizabeth Richardson’s heartening story for yourself before the Fringe Festival ends on September 20 – try and catch one. 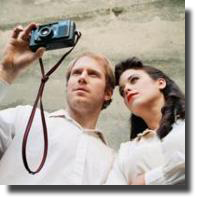 Staircase Theatre
Oh, the Humanity and Other Good Intentions

Five unconnected, ten-minute vignettes make up the core of Oh, The Humanity! There’s the team coach who seems about ready to put his head on the chopping block after a catastrophic season. Then there are the pair of desperately seeking, would be internet daters (Maryanne Renzetti and Brad Duffy), whose introduction videos become gradually more frantic. Renzetti returns as a hapless airline spokesperson after one of their planes has crashed. Renzetti and Duffy pair up again as a couple of photographers attempting the recreation of a point in history with the audience as subjects. Finally, there is a married couple (once again Renzetti and Duffy) who don’t have an inkling where they are going or how to get there.

Each scene initially comes across as absurdist theatre before turning into dark comedy and thus more relevant. Local actor Maryanne Renzetti and Albertan Brad Duffy manage each transition from camp to melodrama with the nonchalance required in Will Eno’s writing. Multi-faceted actor Tom Pickett has a cameo appearance in the last scene. 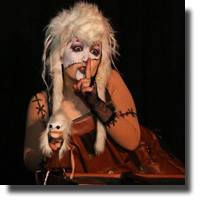 SHOSHINZ
Kiss Around Pass Around by Barbara Ellison

The first thing I learned from this show is that Kiss Around Pass Around isn’t some literal English translation from some obscure Japanese proverb, but the name of Japanese clown Yanomi’s alter-ego. She steps out of a customized steamer trunk and takes command of not only the stage, but the whole theatre. With the help of her own hand-made puppets in the form of a black goat, a white goat, a talking book and some willing members of the audience, she wins over (most of) the crowd.

What she lacks in slick comic timing, she makes up for with a child-like sense of fun. From her quirky, staccato style of delivery, one gets the sense that the only English she knows is that which pertains to her performance. That didn’t seem to matter much with younger members of the audience who seemed happy enough to sit back and enjoy Yanomi’s infectious charisma. 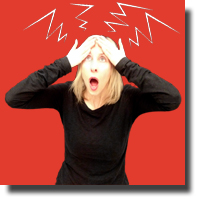 Deep Water Productions
Rhonda Badonda: The Adventures of a Girl with a Pain in Her Brain

Rhonda Musak brings her odd autobiographical tale to this year’s Fringe Festival. This one-woman performance is at times humourous, at times heartbreaking, but ultimately inspiring as the protagonist takes the audience on a journey through the sorrow and suffering of being afflicted with neurological dysfunction.

From a basic black box stage with a low wooden stool as her only prop, we listen as Rhonda tells us of her academic struggles. First, as a third grader, through high school and even in college, she wonders why she can’t seem to function normally in the world.

Rhonda is prone to severe headaches – but perhaps if she used her brain less? She claims that “being functional is a full-time job.” The protagonist’s rhyming name might prompt readers of children’s books to postulate on the similarity with stories involving housekeeper Amelia Bedelia who repeatedly misinterprets various commands of her employer.

Rhonda’s difficulty in processing verbal information, particularly in noisy environments, often leaves her to guess about gaps in dialogue. She hypothesizes that “other people are possibly just as miserable, but are better sports.” Her battle against auditory processing disorder leads her to the Paris Opera, Mozart, an electronic ear and ultimate recovery.

Musak’s compelling story is certainly worth hearing, but in taking seventy-five minutes to tell is probably asking too much of Fringer’s attention span.