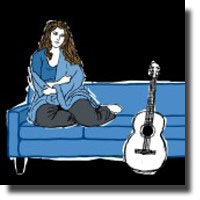 My Aim is True

My Aim Is True is Meghan Bell’s new play that takes its starting point from Elvis Costello’s song Alison. The play’s protagonist is named Alison after the 1977 song. Sadly though, the narrative connection pretty much ends there. Costello’s tune is a charming bittersweet tale of unrequited love, whereas, Ms Bell’s play is a bit of a “downer.” While My Aim Is True (the title is taken from the song’s lyrics) does have its moments of poignancy that moves one to laugh and cry at the same time, the dialogue is mournfully weak and poorly delivered.

Alison and Jack (Erika Babins and Alex Nicoll) are a couple of eighteen-year-olds at the beginning of a promising relationship when Alison’s mother, Olivia (Nancy Von Euw) is diagnosed with throat cancer. Olivia doesn’t care much for hospitals, doctors nor Alison’s boyfriend. Much of the show is taken up with Alison trying to persuade her chain-smoking mother to get chemotherapy to the extent that she convinces Jack to kidnap her in an impromptu intervention.

The best part of this show is the few songs speckled throughout, including a quirky cover of Costello’s Alison by Alex Nicoll and an amusing fantasy sequence where Olivia dreams of a younger version of herself (Alysson Hall) seducing Harrison Ford.

Perhaps it’s just that I still enjoy listening to the Elvis Costello song, that I really wanted to like this show. Alas, I left the theatre feeling underwhelmed. The performers must have been overwhelmed to see close to a hundred people in the audience – since they only brought enough programmes for the first ten. 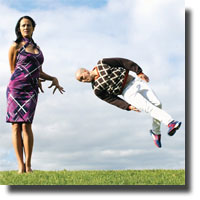 The Ballad of Herbie Cox

The Ballad of Herbie Cox might be the most unorthodox show presented at this year’s Fringe Festival – and that’s saying a lot. Multi-talented Australian Husband and wife duo Victoria Chiu and Roland Cox offer a gunny sack full eye-openers. The incredibly supple Chiu, who is half Asian, half European, is a dancer/choreographer. Jamaican-born Cox is a dancer/musician with an engaging penchant for comedy.
It’s a highly visual, cross-genre show that includes improvised puppetry with Kleenex tissues, musical interludes that run the gambit from Brahms to Marley and some amazingly weightless interpretative solo dance by Victoria Chiu. Chiu handles the major share of the verbal narration that explores personal roots-tracing while Cox tickles the keys of his Roland RD-700GX. Together, they perform the most electrifying, gender-splitting song and dance routines you likely to see on the Fringe circuit.

It’s not perfect. The association between performance and narrative often seems disconnected. In fact, I lost interest in the storyline about two-thirds through, but my fascination with the stagecraft never waned. The show provides one last surprise with the eponymous Herbie making a cameo appearance at the end. 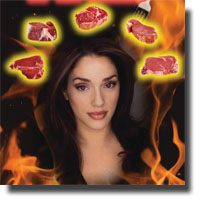 Burnt at the Steak

Burnt at the Steak is a rowdy, bawdy one-woman show with its roots firmly planted in stand-up comedy. Carolann Valentino seems larger than life. She comes out on stage in a blast, complete with Stetson, buckskin jacket and swinging a pair of provolone balls. Despite an obtuse title (I wondered if Steakhouse Dining 101 might have been more suitable – naw, maybe not) and some meretricious interaction with the audience, the show is a load of fun.

Carolann Valentino is an Italian girl from Texas (apparently very much in the minority down there), with a burning (no intended pun) desire to act on the Great White Way. She gets side-tracked on the way with a stressful, but well paying day job in a fancy steakhouse in New York City. In the course of recounting her experience, she channels a dozen-and-a-half colourful characters throughout the show, half of whom colleagues, half customers. Among the most amusing: a bubble-headed hostess, a hard-nosed manager and a haughty maitre d'hôtel.

There are a few songs speckled through the show that help Valentino’s fast-moving dialogue. One of these, a parody on Moon River by a brazenly immodest patron, arguably provides the show’s highlight. 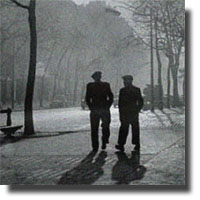 Melanie Gall and Bremner Duthie come together for this entertaining sixty-minute cabaret show with a deliberately (lengthy) bilingual title. The pair indulge the audience with songs and stories of Parisienne songbird Edith Piaf and Belgian troubadour Jacques Brel. They fill the gaps between songs with some light banter as well as touching on historical details in regard to the subject’s lives and anecdotes about their own careers. The songs are (mostly) in French and the banter is in English.

The repertoire of ten tunes cover the high points of Piaf and Brel’s musical careers with the classically trained Gall and Duthie combining on three of the songs. If titles like Sous le ceil de Paris, Plus bleu que tes yeux and La chanson son des vieux amants mean little to you, their melodies will certainly help you recall a twenty-year magical musical period that started when WWII ended.

Gall’s rendition of La vie en rose along with Duthie’s interpretation of the Brel classic Amsterdam brought the most response from an appreciative audience.