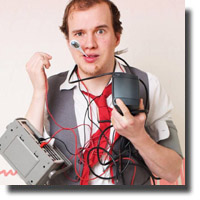 The Most Honest Man in the World

The Most Honest Man in the World

Wade bares his soul in this performance where he searches for the truth of whether he is honest with the way he lives his life. He wants to be completely honest with no margin for error. He uses a lie detector machine, apps, mementoes and tap shoes to reflect on his own honesty. He tells the audience his life story including all situations, since the age of five, where he has tried consistently to be honest with everyone. Incidents in school and church are discussed, his love for the girls he falls for or lack of it, are spoken of with passion. In the end, he asks the audience to judge whether he should continue to depend on all his contraptions and memories to judge his own honesty or whether he should give them all up and start afresh. The vote is almost equally divided. Andrew will have to decide for himself! The conflicts that he presents of his real-life situations, demonstrate the enormous, emotional difficulties of following Shakespeare's axiom of “To thine own self be true.” The script is a little too long but otherwise, an intense study on the thought process of a person who wants to be completely honest. 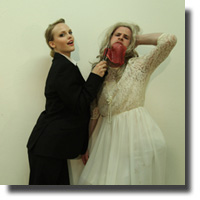 This sketch comedy has some slapstick humour, and comedic interpretations on the risks of dating. The show opens with a loud noise, music and a howling woman who is heartbroken about her failures of finding the 'right' man. There are about 7 scenes, each showing real-life situations that make dating difficult, if not impossible. One such, is a hilarious scene where the Secret Service interrupts every action of the supposed US President while he is on a dinner date. Other situations such as dating when single with children, choosing the wrong location on a first date especially if it is done to impress, dating the “cheap” guy are scenes portrayed with dark humour, risque words and often fast-paced dancing and song. Technology, music and scenery props are manipulated quickly and efficiently. Overall, it was a fun show. We mothers, were asked to show our hands if we had children. When I put my hand up showing 3 fingers, the spritely actor raised his eyes in appreciation of how burdensome a task I accomplished. Buy Me Dinner First is an entertaining sketch performed by energetic, skilful actors who delve into the perils of dating with humour and pizzazz. 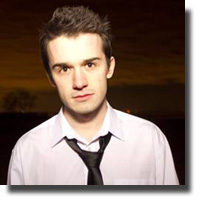 An excellent performance! Keith Brown is a recent Tedx speaker and award-winning magician. Brown is master of his magic and knows how to get his audience enthralled and to participate fully in his magical acts. “I have been doing this for 13 years,” he says and it shows by the way he moves his magic feats slowly but surely, into surprising results. His meticulous planning and the constant audience participation keep you on “pins and needles.” Some of the latter, he uses to amuse and keep the onlookers in awe of the outcome.

A delightful show where the audience becomes part of the interactive entertainment. This is a family show and can be enjoyed by young and old. It will leave the audience in wonder and intrigue. 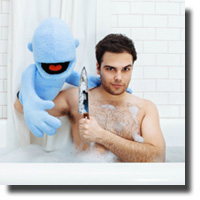 
Proulx is the single puppeteer who transforms one puppet into the 12 members of the jury in this courtroom, murder mystery. He manages to give a lot of character to his many puppets, some as women and others as old, cranky men by changing their gear and to a lesser extent, his voice. However, some of his articulation of the words is not clear and it is at times hard to follow the arguments. It might have been better if these “bickering” monologues were shorter or if he had worked with fewer puppets. With so many characters it is hard to follow the different viewpoints and the end result is rather confusing. Adam worked hard to keep the pace but lost his audience's attention, somewhere along this repetitious change of puppets.