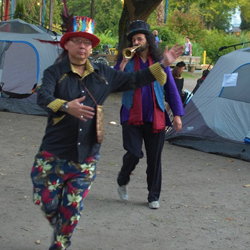 Inspired by the social experiment Date While You Wait where strangers connected with Thomas C. Knox in the NYC subways, Walk the Talk is what director Bon Dos describes as an immersive theatre adventure. The performers along with himself provided free admission with the request to simply open communication in our personal lives and pay it forward with acts of random kindness.

This is an outdoor carnival-of-sorts where participants meet with 3 performers who will uniquely discuss the past, present and future within their own lives as well as the participants’. Each tour is customized to the participants’ life experiences and portrayed through many characters including mimes, dancers, singers and wizards!

I wasn’t entirely sure what to expect as this isn’t traditional theatre and I left the adventure feeling pleasantly rejuvenated. Customizing the participant’s life through different forms of art was special as each performance is personalized. The costumes, whether it was the gypsies or the wizard, coupled with the outdoor tents created a mystical atmosphere where anything was possible.

“Human Interaction, we don’t do enough of that” - Thomas C. Knox. Dos, this year’s recipient of the The Spirit of the Fringe Award (SOFA), has effectively motivated us to communicate more. 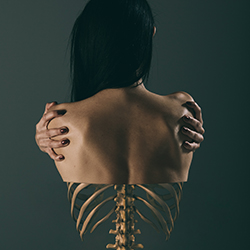 Directed by Marisa Emma Smith, winner of the Cultchivating the Fringe Award and the Joanna Maratta Award, Marrow is a dark story about the power that addiction can play in one’s life and the effect that it has on their loved ones.

All dressed in black and illuminated by candlelight, Morgan and Maura who are sisters debate vehemently about the struggle that Morgan has faced with bulimia in the past few years. Maura is a serious and focused academic who is hard on Morgan for not being able to control her addiction to purge, while Morgan tries to paint for her the efforts she has made to get back on the right path and what she has gone through. As the play progresses, it becomes apparent they might be more similar than they think.

I enjoyed this play as the acting was powerfully and emotionally delivered which aligned with the topic of battling addiction. The dark props and attire contrasted against the candlelight, giving an audience an eerie and suspenseful feeling as the debate between the performers ensued. If you are looking for a light, funny performance to brighten up your evening, this however might not be the Fringe show for you.

In this short monologue, Nadeem Phillip plays Lenny, a bright twelve-year-old youth who is deeply aware of the troubles facing his personal surroundings as well as his external environment, specifically the ocean. Using the audience as the backdrop for his Speaker League high school competition, he educates us with alarming facts about the effects of pollution on the ocean and its life forms.

Abandoned by his mother and living with his ‘redneck’ father and stepmother, Lenny feels alienated as he feels he is the only one concerned with the sake of our environment. Using examples of his personal troubled adolescence as a microcosm, he paints the picture of the larger macrocosm, which is our endless ocean that continues to be polluted despite the recognized warning signs we all are aware of.

Manned with a wagon, sound machine, book and backpack as his only props, Phillip’s acting shone as he portrayed a caring and inquisitive teen. The sound effects were also effectively placed to keep the energy of the monologue high.

As Lenny reminds us that the ocean can still be salvaged, so can our lives regardless of the problems we are facing. With every ebb, there is inevitably flow… just like the ocean. 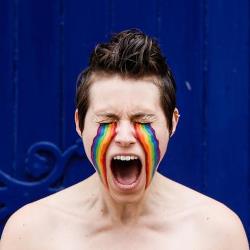 Michelle/Ryan, referred to as Ren hereafter, put on a captivating one-hour monologue comprised of song, storytelling, comedy and theatre in zir production of Ze: Queer as F*ck!

While ze currently resides in New Zealand, Ren chronicles zir earlier years growing up on the West Coast that was strongly influenced by zir Christian upbringing. As a young adult, ze struggled with where ze fit within the spectrum of zir sexual orientation and spoke candidly about it. Coupled with zir family’s rejection, this autobiographical story was cleverly presented with humour when appropriate to keep the dark plot entertaining in a satirical sense.

I felt that Ren did a great job at keeping the audience entertained without the assistance of big theatrical props or soundtrack. For me, the one-hour performance flew by and the out-of-the-box topics fit well within a fringe festival. I have also always been a fan of engaging the audience through participation and I felt that ze did a good job at this with the small group.

The content is very sexual in nature with non conventional topics discussed. If this would pose an issue for you, I would recommend thinking twice before attending.

Ren teased about all the labels that there are in the gay community for the different communities, preferences and stereotypes. While ze spoke to a certain subset of society, I believe zir message extends to everyone. We all have our own unique labels and should be proud to own them.