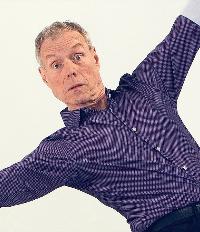 It was a delightful surprise to witness Trent Arterberry’s incredible talent in his presentation of how success can enslave a successful artist, and threaten all that is dear to him. I say, “delightful” because Arterberry carries the show with such personal charm and gentle humour, and because his skill at mime negates the need for sets or props.

Fine direction and dramaturgy were evident in the concise and economical transitional elements, and the movement through the story with never anything overdone or overstayed. Sound and lighting were precise and effective.

Now, back to Arterberry’s performance! It turns out to be a memoir of a street performer’s rise to fame, propelled by stints with Arnold Schwarzenegger, rock bands, Saturday Night Live, and other fortuitous contacts. Arterberry changes the general idea of mime performance by narrating the story, and taking on the personalities of the characters. He is the performer, the analyst, the agent, the wife, and other incidental and not-so-incidental characters as the story unfolds. His miming brings the story vividly to life with every part of his body and face involved during every minute of the performance. The audience showed its delight several times throughout, bursting into laughter and applause. Tight-Rope is a marvellous tribute to a life well spent and well appreciated, and Trent Arterberry is the man who is living it! If envy weren’t a vice… 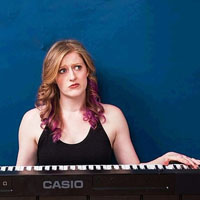 Bostonian Gwen Coburn’s sixty minute, one woman show covers a few bases – not all them – but certainly enough keep her audience guessing and perhaps even lose some on the way. She discusses topics that are convenient and inconvenient, relevant and irrelevant such as: her Ophidiophobia, that pillar of improvisation known as #YesAnd, her professionally diagnosed PTSD and Greek mythology.

Ms. Coburn’s patter is interspersed with those whimsical self-penned Sad Girl Songs starting with the very funny “Clit Song” – no explanation needed. Later in the show, Coburn’s musical subject is a “Daddy Issues Boyfriend” who reminds of fellow comedian Jim Gaffigan. In the jazzy “Emotional Labor” Coburn describes how she unloads all her affectivities on her beau. Her last song is less dramatic than the title suggests. In “Thank You For Not Murdering Me,” she is just relieved that she was in no real danger from an innocent UberTM driver.

While she doesn’t mind friendly reptiles like the GEICO Gecko, she feels that her fear of snakes is worth sharing through a light-hearted PowerPointTM presentation.Coburn’s style of feminist-based Musical Stand Up certainly seemed to go down well the audience that was pretty much 50-50 male and female. Gwen Coburn is at her best when being irrelevant. Alas, at the end of the show the light-hearted banter, for me, turned a little too serious. 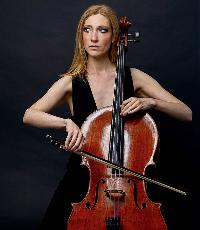 Munching her way through a SubwayTM sandwich, a tall slim blonde in a long black gown explains how she got drawn into her career as a classical cellist. It appears to have a career that chose her, rather than the other way round. Eventually though, she does take her instrument out of its hard black case and play the Prelude to Suite No.1 in G Major for Unaccompanied Violoncello by J.S. Bach and plays it sublimely. In between playing pieces of Baroque, Los Angeles based Karen Hall expounds on the few advantages and the many disadvantages of life as a full-time professional musician.

As she removes the black gown to reveal blue jeans and a black sequined blouse, her dialogue becomes edgier. She becomes even more overstrung when the jeans are removed to reveal a mini dress. Ms. Hall certainly delivers a quirky performance, leaving her audience to wonder if she really loathes being a classical musician that much. Leaving the stage through the same doorway as the audience enters and exits, she was once again wearing the long black dress – and a barely detectable wry smile. 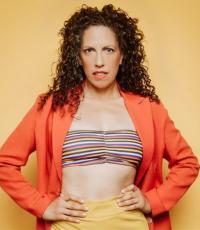 The title of Rita Sheena’s artful, semi-autobiographical theatre/dance piece comes from a selection of Leonard Cohen’s songs. Sheena’s athletic choreography dovetails exquisitely to Cohen’s songs that include: “Everybody Knows,” Who by Fire,“ “You Want it Darker,” “If it be your Will” “Famous Blue Raincoat” and Hallelujah.“ The performer shows beautiful movement around the stage, interpreting Cohen’s music to imaginative dance syntax.
It’s not Cohen’s original recordings we hear in the audience, but the sumptuous interpretations of Johanna and Kiara Söderberg, who form the Swedish duo First Aid Kit. I have somewhat mixed feelings about the part of Sheena’s performance where she duplicates the lyrics in speaking form as part of the choreography. The performer goes through an array of costume changes – some taking place on stage.
By way of an encore, Sheena engages the audience in a spoken word rendition of Leonard Cohen’s ”Closing Time.” I’m sure this show could be expanded into a full blown theatre piece, providing Ms. Sheena allows the choreography to tell the story.