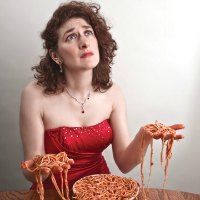 I went into this show with the expectation to have a few laughs at the expense of someone else’s mother.  I had no idea this would turn out to be one of my Fringe favourites; a powerful and evocative memoir that made every audience member question their own relationship with their parents.  I left the theatre with a new understanding and appreciation for my parents’ upbringing and about how their embarrassing quirks are the result of their own personal traumas and joys.  Eating Pasta off the Floor made me both cry with laughter and tear up with empathy.  Maria Grazia’s impersonations of family members and those they encounter in their lives were entertaining and vivid.  Her powerful performance will stay with you long after you leave the theatre. 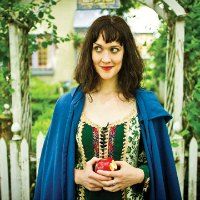 Psychology meets Disney Princesses – two of my favourite things!  Mindy Dillard creatively shared her story of overcoming anorexia through the use of song, electric guitar, a book of fairytales and a smidge of lipstick.  The metaphor of a poison apple was used to explain how we princesses allow poison into our own minds – in a variety of methods but especially via our own self-defeating thoughts.  Dillard gently invited audience participation and I was shocked to find myself (along with everyone else) singing along which really made all of us in the theatre feel truly connected to the piece.  This is a performance I would want to show to every impressionable teenage girl I know.  It gives the important message that no matter what we eat or believe, we are all “full” – not lacking or omitting anything; complete.  Best of all, a portion of the proceeds from each performance go to support Vancouver based The Looking Glass Foundation to support locals living with eating disorders. 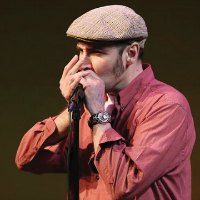 Although I have a psychology degree and have worked in the field of addiction, I did not fully understand the gambler’s mind until I saw Mr Ledbetter’s honest performance.  He begins by explaining to the audience how dopamine works in the brain – how it rewards thrills and keeps us craving that feeling again.  He goes on to explain (with help from a jaunty harmonica) his downward spiral into debt and how a self-help group finally helped him re-establish control of his own life.  I was left empathizing with his dilemmas and left feeling torn about his tough choices instead of judgemental.  This really is a performance that all mental health professionals should observe, along with family members of problem-gamblers.  We were left with a sense of hope when Mr Ledbetter reveals how good things can come when we finally seize control over our own lives. 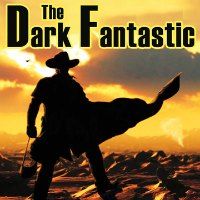 Performer Martin Dockery After spending an intense and descriptive hour in the dark with Martin Dockery, I feel like I just lived a Choose Your Own Adventure Novel directed by Quentin Tarantino.  Rather than acting out his story, he invited us to close our eyes and imagine our own story.  He spoke in the second person in a chillingly effective manner, describing what was happening to us so we could act it out in our own imagination.  The Dark Fantastic is one of the most unique and creative performances I have ever seen at the Vancouver Fringe over the years and is a must-see for all performers and theatre lovers alike.  Dockery joked that audience members could purchase a copy of his DVD for when they are “stoned” but I would love to experience his powerful storytelling again on my own as I truly felt transported to another realm. 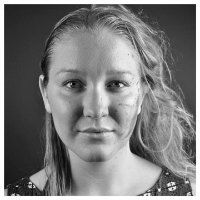 Performer Christine Robinson You know you are about to watch something intimate and personal when you learn the author had to debut it in a different city so people she knew would not attend.  I was expecting to hear an outrageous story, but did not think I would end up feeling as truly connected to the author as I did by the end of it.  Kayla Hart wrote this piece based on her own experiences with obsessive compulsive disorder.  It was performed with a very basic set, but the honest words soon took on a descriptive life of their own and I was left feeling anxious and overwhelmed like the author must have felt living it.  The most powerful part of the piece for me was when OCD was compared to an abusive relationship – how you feel compelled to stay and act out a certain behaviour rather than making the seemingly more logical decision to leave -because it feels like you aren’t the one in control anymore.  Toward the end of the piece, I felt a sense of regret that the author chose to have an actress play the part rather than sharing her own story onstage.  I was so happy when the author joined the actress on stage at the end of the show – it was a brave choice to be so vulnerable in front of a strange crowd, but I feel that decision was as beneficial to the author as it was to the audience.