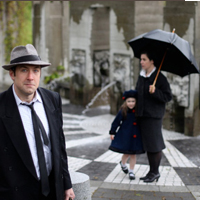 A white bed sheet embroidered with an Italian flare blows in the breeze on a clothesline which hangs in front of what used to be an old home with an attached coffee shop. The sound of mocking crows fills the air. Fresco is a story about Rosina (Susan Bertoia) who visits her family’s home on Commercial Drive in order to put up a FOR SALE sign. As she bangs on the door to evict whoever is living there her family’s past comes alive. We are soon transported back to the year 1940 to a time when Mussolini sides with Germany and our Canadian Italian neighbors become our enemies.

The War Measures Act is established and families and friends are torn apart. Forty-four Italian men were arrested in Vancouver and placed in work camps where they were considered enemies of Canada. Even though Italians lost their homes, businesses and were separated from their loved ones they retained their dignity and tenacity.

When the war ended Rosina’s father returned from serving with the Canadian Armed Forces. The men were released from the camps and sent home. With great determination they rebuild their businesses and homes but the sting of being judged an enemy would last a life time. Rosina is brought back to the present and takes down the FOR SALE sign. The old house is renovated and soon returns to its former self - a home and a popular coffee shop on Commercial Drive.

The play’s beginning felt like success and so it was throughout the entire play. It was a great story line with humor, sadness and it brought us introspection as Canadians. Who is a Canadian anyway? Canada is made up of many ethnic groups that live in and share this society.

Bertoia, played a man’s part well. Giulianetti, Rinaldi, and Soriano looked lovely in their roles as old Italian women. Yes sir, those Italian shoes shone right to the back of the theatre. The bantering in broken English and expressions were also well done. There may have been a couple of slips in lines but the play overall was well executed. The use of a clothesline to create a backdrop was a creative plus – so hats off to the stage team. My compliments to BellaLUNA, a Vancouver-based theatre company for a job well done.

If you get a chance to get down to this performance at the Shadbolt on until March 24th you will certainly be either entertained or enlightened.