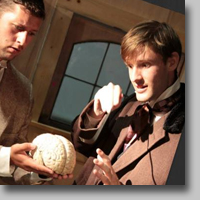 This iconic story by Mary Shelley has been made into film since the last century and has been adapted as a stage play by American playwright Fred Carmichael in 1996.

I enjoyed this play, although I had to sit in front for the second act because the actors weren't voice projecting enough, except for Colleen McGoff Dean (Aunt Frederica) and Lionel Rust and Charles Buettner (Gravediggers). I also noticed there was an inconsistency in accents. The gravediggers spoke with a German accent and all the rest had either an American/Canadian or British accent. I think there should have been some kind of consistency, accentwise.

This type of a play could go either way: a comedy or a tragedy. If teenagers were watching, they would probably laugh at the Creature. But for the more mature, this would probably go the other direction: a melodrama, verging into soap opera which a lot of adults, especially seniors, love.

For me personally, I like these types of melodramas. They bring back memories of the way theatre used to be and I'm glad WRPC still maintains that tradition. The set by Paul Ledaire was well designed--on the left, the living room of Victor Frankenstein and on the right, his lab. The costumes by Laura MacKenzie were period and well-portrayed, and the pacing of the play by director Dann Wilhelm was just right.