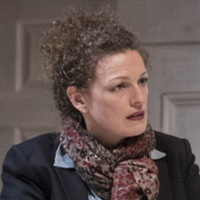 Forget About Tomorrow is Jill Daum’s bittersweet family drama with healthy doses of humour mixed in. It’s very much a local story inspired by the playwright and husband John Mann’s own real life struggle with John’s early onset Alzheimer's disease.

Naturally, in this fictional account, the story belongs to Jane (Jennifer Lines), a regular Ms. Normal who works full time as a retail associate in a baby shop. She becomes a reluctant caregiver when Tom (Craig Erickson), her fifty-year-old husband of twenty-plus years is diagnosed with Alzheimer's. Like many middle age couples, they have concerns about their adult children’s future and the stress of keeping ahead of their financial predicament.

It’s reasonable perhaps, that prior to Tom’s diagnosis, Jane puts a lot of her spouse’s funk to neurosis and even mid-life crisis. But Tom, himself a health care professional, already senses that there is more at issue than a case of temporary depression. It may be that the most poignant scene in the entire play is when, on learning the result of the MRI, Jane and Tom sit down next to each other just repeating the ‘F-word.’

Michael Shamata handles the direction with sensitivity and sagacity. However, he is fortunate to have Colleen Wheeler as the egocentric, over-sexed Lori to bring much needed levity. The inclusion of Hrothgar Mathews, a recent widower and Jane’s inamorato, is handled less well. The ill-conceived tryst and subsequent unwise confession of infidelity seems completely outside of Jane’s character and risks alienation with the audience.

The play relies hugely on the use of technology (perhaps too much so). The couple’s young adult offspring Aaron (Aren Okemaysin) and Wynn (Aleita Northey) tender most of their performances via simulated SkypeTM. Okemaysin only appears onstage once in the first act, while the young Ms. Northey is never seen until the curtain call.

Jennifer Lines and Craig Erickson each turn in tour de force performances in the central roles. Erickson is especially impressive as he takes his character through a range of debilitations. Lines who is omnipresent on stage, ably demonstrates the challenges of a spouse called upon to face issues outside of her control.

Pam Johnson’s mono tone set that uses a revolving platform switches (not always seamlessly) between Jane’s baby shop and her family’s kitchen. The white counter at centre stage presumably indexes between two positions to identify the location of the many scenes. However, inconsistency sometimes creates confusion in knowing where the action is taking place. The floor to ceiling compartmentalized wall cleverly doubles as a multi-media screen.

By way of adding authenticity, John Mann contributes a pair of well-crafted song that dovetail perfectly into the storyline: “You and I” (possibly not the exact title) sung by Craig Erickson at the beginning and “Forget to Forget” sung by Aren Okemaysin at the very end.

Forget About Tomorrow is really a story of courage in the face of adversity. If it teaches us anything, it’s that, failing valiantly is more heroic than winning.

An Interview with the playwright Jill Daum

Jill Daum’s family drama Forget About Tomorrow opens at the Goldcorp Stage at the BMO Theatre Centre on March 1st. For many theatre-goers, it will be an opportunity to see a brand new Canadian play, but for many more who are familiar with John Mann’s courageous battles, first with cancer and now with early onset Alzheimer’s, they will almost certainly find inspiration in Jill Daum’s very personal project. The subject of personal burdens of being a spousal caregiver was touched on in Mom’s the Word 3 with Jill opening up in the show with some deeply poignant anecdotes.

I talked to Jill this week about her play and her own hopes and aspirations. The play has already been showing at the Belfry in Victoria since January 23, so I asked what kind of reception it has been getting. “Very good, almost all the tickets have been sold and the reviews have been mostly positive.” “I think perhaps because of Victoria’s demographic (more seniors), a play that focuses on Alzheimer’s is going to draw a larger audience.”

Jill doesn’t act in the play, so I asked about how the cast and crew were chosen. “Jennifer Lines is Jane and Craig Erikson is Tom, her husband who has been diagnosed with early onset Alzheimer’s disease. Jane has difficulty coming to terms with it and goes into denial instead of adopting radical acceptance” (radical acceptance is a clinical term that simply means acknowledging reality). Although inspired by personal circumstances, it is fictional, and despite the serious subject matter the play is quite funny in parts and there are two songs written by John (Mann) – the last songs he wrote”

Moving on to the artist’s career and how she started. “I started acting at high school at fifteen where I was exposed to experimental theatre and mime, before going onto Studio 58” (the production arm of Langara College Theatre Program).

I asked if there had been anyone that she had looked up to and had given inspiration. “For this project, I’ve found a strong connection with Michael Shamata who is directing the play. I’ve also admired Morris Panych for quite some time and consider him a friend.”

When not performing or care-giving, what does Jill Daum do to relax? “I really don’t have a lot of time right now, because I spend a lot of time managing John’s health issues, although, I do find writing therapeutic.

Jill was initially reticent to discuss personal accomplishments. “I don’t like to reflect too much on past achievements, just to pat myself on the back.” “However, I‘m proud of the shared success I’ve had with Mom’s the Word. Right now it’s playing in France and Switzerland and has been translated in roughly twenty languages.”

When asked about a hypothetical preference for any future roles, her answer came with little hesitation. “I would love to act in anything by Joan MacLeod. The Arts Club put together a wonderful production of The Valley a couple of years ago that was set in Vancouver.” “I’ve met her a couple of times while she has been teaching at UVIC.”

Forget About Tomorrow concludes its run at the Belfry on February 18, then moves to Vancouver with the same cast and will run from March 1 until March 25 with no previews.

After Vancouver, what’s next for the play? “Naturally, I would like to see it picked up by other theatre companies and perhaps see it produced in other parts of Canada.” She replied enthusiastically.