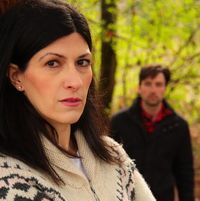 This is the Western Canadian premiere of this play directed by Jessie-nominated Tamara McCarthy, and featuring Carlo Marks as Bobby and Sandra Medeiros as Betty.LaBute's style is very language-oriented: terse, rhythmic, and highly colloquial. very similar to one of his favorite playwrights, David Mamet. Medeiros and Marks delivered their lines as LaBute would have wanted them to. It's a powerfuil play, and both actors did really good acting their roles as brother and sister in a love/hate relationship.

I was also impressed by the scenic effects: thunder and lightning, giving this isolated house in the forest a mysterious feeling. But the storyline was very good. LaBute knows how to keep us guessing and asking, "What's going to happen next?" That almost Hitchcock-like suspense, as Bobby probes into Betty's personal life, getting the truth from her.

She slowly confesses her crimes, but younger brother Bobby is there to help her out, despite their differences and different viewpoints on morality and life.

Very well-acted and directed. Kudos to the actors, director and production staff for a successful mise-en-scene..