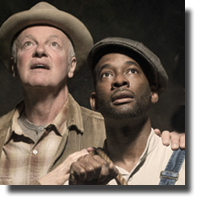 Margaret Gallagher, host of CBC Radio One's Hot Air, in an on-stage introduction described Floyd Collins as unique musical theatre. It may not be unique, but it’s certainly different. Everything from Adam Guettel‘s (Richard Rodgers’ grandson) intricate musical score that incorporates American roots music down to the protagonist trapped underground for ninety percent of the show, is unconventional.

Set in Kentucky in the mid-winter of 1925, caver Floyd Collins goes down to explore the subterranean cavities of the Mammoth cave system in the realistic hope of discovering an alternative entrance to his family’s farm. Success would surely ensure his family’s financial security. Collins was able to crawl through holes that few other men could even reach, so when he got his leg stuck under a displaced rock – he was going to be trapped there for a while. When a rescue team eventually excavated that far below the surface, he was already dead.

This real-life story is not Floyd Collins’ alone. It was really the first known manifestation of media frenzy and it certainly exposed the best and worst of human nature. Journalist William Skeets Miller, who later went on to work for NBC, represented the best by crawling down the shaft to reach Collins and gave him hope. Businessman H. T. Carmichael, who bankrolled the rescue operation, mainly to serve his own self interests, represented the worst.

Daren Herbert is the titular spelunker. If you can get past the handsome Bermudian-born actor playing a wiry white Kentucky farmer, he’s an excellent choice. Notwithstanding he spent much of the show lying on his back almost unseen, he put forward both singing chops and heroic stage presence.

Amir Ofek’s odd-looking staging is made up of four sections of hardwood flooring strips mounted over random chunks of solid foam tipped at various angles across the stage to reproduce the central Kentucky’s unstable limestone belt. Ofek has attempted to create surface and subterranean tracts within the same set, and to an extent, succeeded.

Adam Guettel’s terrific bluegrass inflected songs works best when performed by the entire company. Thanks to musical director Jonathan Monro and the agile five-piece orchestra’ s lean arrangements, songs like “The Ballad of Floyd Collins” and “Through the Mountain” (beautifully sung by Krystin Pellerin) are performed in the narrative context.

If you enjoy musicals that are a little less Broadway, this show might be for you. But be warned – Bye, Bye Birdie it ain’t.