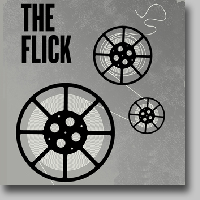 The Flick opens with the ushers sweeping and cleaning incessantly between the movie shows. Most of the play's running time of over 3 hours is taken up, this way.

The three ushers develop a superficial friendship by working on a monotonous and boring task of picking and getting rid of popcorn and garbage that's left behind after the movie.  The monotony is sometimes broken by Avery's genius at reciting names of actors and lines from a variety of movies, by an odd encounter like a person sleeping well past the movie showing time and by the ushers finding a lot of unusual, filthy leftovers.

Sam (Haig Sutherland) suffers from an itch, Avery (Jesse Reid) from vomiting if he sees other people's stools while Rose (Shannon Chan-Kent), the projectionist, works alone, in her private space above the theatre.  Sam keeps the audience amused with his skilful expressions.  He knows the job well as he's stagnated there for many years.  He teaches young Avery, a college student, the ropes of the job, including on how to make extra money by tricking the ticketing. The dullness of this low paying job is only brightened by the vivacious Rose.  She brings the scenes to life with her quick-witted words and wild, energetic dances.

Set designer Lauchlin Johnston ensures all stage elements are authentic by getting these from old Vancouver cinemas. He says,  “We inherited our 74 onstage seats from The Cinamatheque this summer and were lucky enough to borrow one of the Ridge Theatre's original 35mm film projectors from Viff's collection."

It is the characters in the play that sustain the storyline and there are many deep topics that give the audience food for thought.  Topics such as friendship, trust, racism and poverty are all dealt with briefly but humanely and you are left with much to think and mull about. Director Dean Paul Gibson says, “ Because of Annie Baker's beautiful obsession with writing dramas in real time, she allows the actors an opportunity not only to explore the silence that can sometimes fill moments with huge emotion, but also to afford the possibility for hyper-naturalism that harkens back to the birth of modern theatre.”

The Flick's long running time also maintains the running times of old theatres.  The play is long and at times repetitive but I believe it's done on purpose to project the tediousness of the old projector and the slowness of pace of those times.  It's almost meditative.  It could be difficult for some in the audience, to maintain their interest in this day of instant gratification and with the digital world at our fingertips.