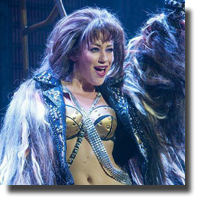 Oh, what a feeling! We just knew it would happen sooner or later – Flashdance gets it’s very own stage musical adaptation. Adrian Lyne’s 1983 film was far short of being a critical success, but due mainly to fortunate timing, became a blue-collar pop-culture phenomenon. It was also responsible for launching the career of Jennifer Beals, even though her signature dance scene was actually performed by dance double Marine Jahan.

The film (and now the stage version) was inspired by the real life story of Maureen Marder, who worked as a construction worker by day and dancer by night in a Toronto strip club, and like the film’s heroine Alex Owens, she yearned for a place at an illustrious dance school.

Composers Robbie Roth and Robert Cray have wisely retained the best of the film’s iconic soundtrack, including Irene Cara and Giorgio Moroder “What a Feeling,” Michael Sembello’s “Maniac” and platinum-certified hit “Gloria,” originally performed by the late Laura Branigan. Perhaps even more wisely, Roth and Cray decided not to opt for the “jukebox” route, but instead authored a dozen new songs that help drive the narrative.

Some work better than others. “Here and Now,” a power ballad sung by Australian lead performers Karli Dinardo and Adam J. Rennie, is so good, it gets used twice – once at the end of the first act, the again at the beginning of the second act. “Where I belong” also works really well; due mainly to plaintive performances by Heidi Friese (Gloria) and Jacob Tischler (Jimmy).

Adam J. Rennie proves that he wasn’t just chosen for the role of Nick Hurley because of his uncanny resemblance to his film role counterpart Michael Nouri. He shows off his dynamic vocal range in duets with co-star Karli Dinardo and leading the male ensemble with one of the show’s lighter songs, “Justice in the World.”

By comparison to the Jennifer Beals portrayal, we get a tougher Alex, played with spirited swagger by Melbourne native Karli Dinardo. However, her compact body type is hardly typical of that of a ballerina. She benefitted from Sergio Trujillo’s modified choreography – at least, she did perform her own dance sequences.

Brianna-Marie Bell and Danielle Marie Gonzalez, as leggy exotic dancers Kiki and Tess, together, almost stole the show. Ms. Bell in particular hypnotized the audience with a fierce Grace Jones emulation to “Manhunt.”

Paul Tazewell’s deliberately ludicrous show costumes looked like they had been picked up at the Thrift Store a week after Halloween, whereas, the steel workers clothing looked like it came straight out of Mark’s Work WearhouseTM.

The dialogue takes a backseat to Giorgio Moroder's original score and Robbie Roth’s new music, but that was indeed the same with Flashdance (the film). Sergio Trujillo seems to know what’s important when people pay to see a big production. 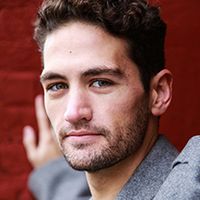 Adam was sent a set of questions, but wasn't keen on responding in writing. Instead, he sent this recording where the questions were asked by cast member Amber (Ardolino) and he answered them orally. Originally from Sydney, Australia. Adam is thrilled to be debuting up in the Northern Hemisphere with Flashdance: The Musical, playing the role of Nick Hurley. Credits include: Love Never Dies, Jekyll & Hyde, Vernon God Little, Next to Normal, The Producers, Irene, Crazy for You & Australian musicals Once We lived Here & Prodigal. BA Theatre-Western Australian Academy of Performing Arts (WAAPA).

Listen to the interview with Adam