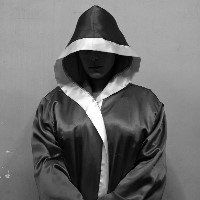 Fight Night: Five candidates. One Vote. Your Choice. What an amazing experience, designed specifically for our audience interaction by Belgian Director Alexander Devriendt. At Vancouver East’s Historic Theatre at The Cultch, we took our seats not really knowing what to expect. What we got was a very engaging piece of theatre that provoked thought and encouraged difference in opinions and perspective.

The set design was a simple white fighting ring (in more of a diamond shape), with two television monitors above and a hanging mic, reminiscent of the type you’d see in a boxing match. The introduction and preliminary “training” was provided by the dapper Angelo Tijssens, who guided us through the voting process with a dark grey plaid suit and some wry humour, definitely a favourite character of the performance. Over the course of a dozen or more voting opportunities, meant to poll the demographics and opinions of the audience, dramatic sound effects sounded when results were revealed on the monitors, akin to “Who Wants To Be A Millionaire”.

Fight Night highlights human nature’s ability to generate preconceptions - through appearances and first impressions - and goads us to vote based on these preconceptions, which change (or don’t change) throughout the performance. The theme decisively illuminates “cult of personality” politics, even paralleling the debate politics happening currently in the US election – in fact, the third US presidential debate was aired at The Cultch’s bar area before our performance, possibly to inspire the audience and get them in the ‘voting mood’.

Several other themes come into play – underdog vs loser, loser vs winner. One candidate states: “Every time I open my mouth I’m at risk of losing your votes,” a particularly overt yet thought provoking observation. Abdel Daoudi, arguably the most radical and antidisestablishmentarian candidate, attempted to argue that the system itself is wrong, claiming that “the only choices you have are the choices they give you.” Presumably, all candidates have rehearsed their lines, as much as it does seem unrehearsed. And yet it’s still a strategic game: each candidate still wants to win your vote, and ultimately, the fight is still “real” in this sense.

In the end, every audience will be different: different ages, different incomes, different marital status, different religious views, and therefore different opinions, perspectives, and outcomes. I found it super entertaining as well as utterly fascinating to compare views in this relatively scientific context, and when our audience’s “majority demographic” was revealed, it turned out I was highly representational of this demographic. A talk with the director post-show revealed interesting insights into the way the show was put together – but I won’t blow it for you, I instead strongly encourage you to experience it for yourself.