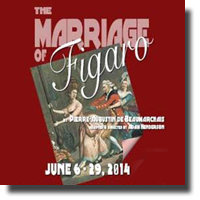 La Folle Journée, re-titled The Marriage of Figaro in keeping with W.A. Mozart’s operatic adaptation, is the second installment of Pierre-Augustin de Beaumarchais' trilogy of plays. A sequel to Le Barbier de Séville, though in terms of the respective operatic versions it’s the opposite, since Gioachino Rossini’s opera buffa came much later.

In Adam Henderson’s madcap adaptation of a United Players production, Figaro has given up his hair-dressing practice to become Count Almavira’s butler. He is engaged to Suzanna, Countess Rosine’s personal assistant. It is Susanna and Figaro's wedding day, though, through some middle-age droit du seigneur, the lecherous count feels entitled to bed the fiancé before the prospective groom. Add to the mix a lovesick page, a scheming former governess, a drunken gardener, and a doddery judge and you have the fundamentals for a lively romp.

Adam Henderson in his secondary duty as the play’s director, keeps this farcical comedy moving at an entertaining pace – at least through the first act. However, he comes perilously close to allowing it to descend into pantomime by midway through the second act.

Among the cast, it’s the women who generally fare better. Mayumi Yoshida is a charmingly coquettish Suzanna who gets stronger even as the production gets weaker. Ms Yoshida shows Suzanna to be as quick-witted as her cunning betrothed. Jackie Minns is delightfully droll as Marcelina and Anna Theodosakis is just as affecting in the only serious role of the Countess Rosine. She is the only cast member to demonstrate that she could hold down the role in the operatic version.

Patrick Spencer as Figaro seems an unlikely hero, but has great chemistry with Suzanna. He certainly has his hands full intercepting his employer’s advances on his fiancée and Marcelina calling in collateral on an ill-advised contract. David C. Jones is hilarious as Antonio (the count’s gardener) and ridiculously outrageous as waffling judge Don Guzman. Young Dexter van der Schyff shows some promise as Rosine’s godson, Cherubino (a role usually given to young females), but still has to learn more about movement.

This theatrical presentation of The Marriage of Figaro was certainly fun. Though, by two and a half hours, it was possibly more fun for the cast than the audience

A manic kind of theatricality and comic caricature wrapped in a carnival atmosphere are only two of the many features that make the United Players production of The Marriage of Figaro so enjoyable. Adam Henderson’s screenplay adaptation enhances and augments his directorial focus: both are aimed at realizing his comedic vision of the Beaumarchais play, a blend of high culture and cartoonish buffoonery à la Bugs Bunny. It is this vision that unifies and ignites the passions of most of the players involved in fleshing out the nuanced and complex plot.

Patrick Spencer’s Figaro is as explosive, conniving, and temperamental as Mayumi Yoshida’s Suzanna—the object of his affection—is a minx whose endearing charms not only captivate Figaro completely, but also go a long way to motivating the strenuous entitlement and sensuality suffused throughout Chris Robson’s vigorous portrayal of the lecherous Count Almaviva.

Circumnavigating the complexities of this play’s numerous subplots and ancillary characterizations would necessitate a sea change: suffice to say there are undiscovered long lost liaisons and unexpected relationships brought to light at the most inopportune moments, to name a few of many plot twists.

Seth G. Little’s eccentric portrayal of Dr. Bartholio is as large as life as his character’s prodigious proboscis, and equally as funny as David C. Jones’ zany judge’s “big dic-tionary”. Rounding out this trio of enfants terribles is Jackie Minns’ matronly seductress, Marcelina with limbs akimbo, pelvis perpetually thrust out like her hair, impossibly teased into a zany torrent of raw emotion. The initial encounter between Seth Little and Jackie Minns is a sheer delight to watch.

Not all moments are as magical. Dexter van der Schyff is in over his head as Cherubino, and it shows. None of his scenes are believable. He is just too young, and his seduction scenes are implausible. David Secunda’s Bazile is a caricature of a caricature and his overacting is far too extreme. That said, these false notes in an otherwise excellent performance are all sounded by amateur actors, and everyone must start somewhere.

The energy and commitment brought to bear by all members of this cast is admirable. The tempo of the play, mostly allegro, rarely lapses into adagio. Henderson’s adaptation accentuates the play’s ribaldry, but does not deviate from the depth of, and commitment to a no-holds-barred battle of the sexes kind of skirmishing. From the opening Fandango of fecklessness to the fading flamenco flourish, Henderson’s comic vision remains intact. Figaro does not disappoint.