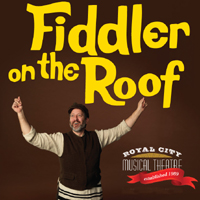 This spectacular performance keeps the audience enthralled and fascinated as to how life was for the Jews in Imperial Russia in 1905. Artistic director and choreographer of this famous musical has picked a gifted cast. Musical director, James Bryson leads a full orchestra playing the well-loved score of songs with fervour and inspiration.

Fiddler on the Roof opens with the iconic tune of the Fiddler (Michael Wilkinson) playing his violin with a melodious, haunting tune portraying the vagaries of Life. God seems to have a sardonic sense of humour causing problems just as humans get their lives running smoothly. This is Tevye's (the main character) query to God. God plays a constant role in his life. His interesting (asides) conversations with God are beautifully portrayed as the scenes are darkened and the music is suitably poignant.

Tevye, the Dairyman played brilliantly by Warren Kimmel acts with so much vigour and energy that he is not only the hero of the play but is the main character that ties the whole play together. He is a man bigger than life, acting humanely with so much empathy and yet tied down by “tradition.”

Each of his first two daughters shocks him into accepting their choice of husbands against his traditional beliefs. The third daughter however, who marries an outsider is too much for him to live with and to accept. The daughters all play their roles with talent. Natasha Zacher as Tzeitel who is the eldest and has a bigger role does it most effectively. Jennifer Poole as Tevye's wife Golde, portrays the hardworking housewife planning her girls' future with skill.

Today, with so much uncertainty in society, it is easy for people to relate to the hardships the Jewish people faced. Jewish families like Tevye's constantly faced the challenge of preserving their culture and not allowing change. Traditions run the gamut of the play. Old-fashioned ideas of women doing the kitchen work, serving the men, the men working back-breaking jobs to support their families, the drinking and dancing -- tradition only allowed men to enjoy such escapes, and the gossip spreading like wild fire in a small village are scenes shown with authentic portrayals, zest and high energy.

The dancers perform with incredible talent while the soloists like Warren Kimmel with his powerful voice and William Tippery who plays the young Russian, Fyedka are truly awe-inspiring. The duet between Tevye and his wife Golde –“Do you love me?”-- is sung with great nostalgic feeling and skill.

The numerous customs of the Jewish way of life are shown with an eye to detail and this makes you feel you are right there with the Jews in their beloved village, Anatevka. The props such as Teyve's house, the barn, the Inn where the Butcher (Jonathan Bruce) acts with conviction, are artfully built to portray this village.

The costumes by Costume Designer Christina Sinosich are well-designed to reflect those times (eg. the prayer shawls). The Rabbi, Peter Stainton who plays his role well and the Matchmaker, Sylvia Zaradic with her shrill voice, both reflect the importance of their roles in this society. The keeping of the Jewish Sabbath, the beautiful wedding scene, the superstitious 'dream scene', the scenes showing the persecution of the Jews and those reflecting their resilience are all portrayed in this play with gusto and passion.

Fiddler on the Roof is a 5 star performance deserving accolades for its great cast, wonderful props, magnificent voices and talented orchestra.

This could well be a 'Must See' for the whole family if they love musicals.