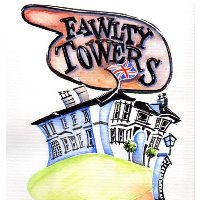 Fawlty Towers is a show that's typical of British slapstick humour. It keeps you laughing at the often ridiculous personas and actions and reactions of the people living in a fictional hotel in Torquay, England. The rather rude and eccentric owner, Basil Fawlty ( Simon Drake) and his bossy wife Sybil,  the charming, sensible chambermaid Polly (Heidi King) and the ignorant Spanish waiter, try to run the hotel, looking after eccentric and demanding guests.

These four main actors, particularly Simon Drake as Basil Fawlty with his constant show of exasperation, act their roles perfectly with their “crazy” actions and many prejudices of the owner (like those against the Germans).  Sybil (Rosalyn Winther) was the perfect nag and the waiter Manuel ( Joe Arduini) did a wonderful job of portraying himself as a childlike ignoramus with his weak English vocabulary and confused mannerisms.  Heidi King as Polly, acts with poise and skill as the chambermaid that saves the hotel from many a disaster.

The setting was suitably built with furniture which worked well for the scenes in the restaurant and kitchen.  The clothes were beautifully tailored for the 70's and the guests who wore them, provided an array of European 'personalities' that added much humour to the scenes.

With all the mayhem of the characters and their noisy reactions to their guests, the play did reflect on certain themes of British life in the poorer communities like their fawning attention to royalty, the fear of authority, the lack of proper hygiene in the old hotels and the hilarity of British farcical humour.

Three episodes of the twelve - A Touch of Class, Basil the Rat and The Germans are performed in this production.  The actors in this play are very much like those on the television screen.  If you feel like living through those times with peels of laughter and many farcical situations, Fawlty Towers at the West Van Theater will definitely appeal to you.

This April, Theatre West Van brings us Fawlty Towers: an entertaining tribute to the 1970’s British sitcom. Directed by Tom Kavadias, the production is divided in to three well-known episodes from the original show: “A Touch of Class”, Basil the Rat”, and “The Germans”.

Fawlty fan from a young age, I entered the theatre with a degree of skepticism that the cast could do justice to such a brilliant cult classic. Created by John Cleese and Connie Booth, Fawlty Towers was inspired by an encounter Cleese had with a “wonderfully rude” hotel owner; it combines dry wit and self-mockery with an unapologetic, highly physical, and often dark, sense of humour.

The show is performed at the Kay Meek Studio Theatre, on a small set thoughtfully designed to resemble the rooms of the Fawlty Towers Inn. Like in the sitcom, most scenes took place in the same two or three rooms, allowing the show to move along without much interruption.

Within the first few scenes of Act 1 it was evident that the cast and crew of the company had taken the time to understand and capture the essence of Fawlty Towers. While the show was not quite as over the top as the original, Theater West Van did a lovely job of retaining the sense of farce that defined the original sitcom.

Rosalyn Winther mimicked the irritation of Sybil with uncanny precision, while Simon Drake—as Basil—carried his role with a lack of grace and humility that was completely on point. As in the original, a clear crowd favourite was the affable character of Manuel, captured with hilarious precision by Joe Arduini.

While each episode had its merits, “The Germans” was my personal favourite from the performance; judging by the energy that the cast brought to the act, I would hazard a guess that it was one of their favourites as well. From the fire drill fiasco to Basil’s Hitler impersonations, the cringe worthy humour that characterizes this politically incorrect episode did not disappoint.

Fans of Fawlty will delight in the familiar jokes and jabs, and are likely to leave the theatre with an irresistible urge to dust off their DVD’s-- it’s not on Netflix folks!--and watch all 12 episodes in one night. While the remainder of this production’s run sold out fairly quickly, I understand that this isn’t the first time Theatre West Van has put on a Fawlty Towers show—fingers crossed they will do it again!
.