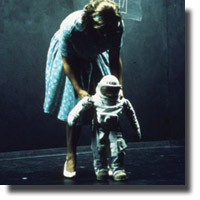 Even though our moon is a sphere and not a disc, it’s easy to think of its surface as two sides: the visible from earth side and the far side, often referred to as the “dark side.” It’s this hidden half of the moon that has intrigued astronomers and psychedelic musicians for decades. Who has listened to Pink Floyd’s 1973 masterpiece, The Dark Side of the Moon knowing that it is adumbrative of lunacy rather than astronomy?

Robert Lepage’s surrealist single act play pays tribute to the Soviet space program that works as a metaphor for its central earthbound apriorism.

For the first half-dozen performances of this mounting, Lepage gives way to Yves Jacques to play both the quirky protagonist Philippe and his obnoxious brother Andre, plus multiple secondary roles. While I’ve never seen the originator in the role, I’m happy to contend that Lepage turns in a brilliantly self-disparaging performance.

The two brothers, who each call Quebec home, are distant in every other respect, and at odds on just about every issue, including the dispensation of their recently deceased mother’s few possessions. Philippe is a wannabe philosopher and a valiant, though largely unsuccessful, post graduate student in his forties. Andre is only slightly more well-adjusted as a television weatherman living with a gay partner.

Philippe’s conversations with (unseen) others, including Natálie, a former girlfriend he accidentally reconnects with on one of his telemarketing calls, and an ingenuous bartender provide an indication of his dysfunction within the conventional universe. The play’s conclusion shows Philippe transmute from an airline passenger to an astronaut, floating in gravity-free space, presumably for eternity.

Lepage’s clever stagecraft and Laurie Anderson’s compellingly evocative score combine to make The Far Side of the Moon a unique theatrical experience. The set includes an oscillating, multi-faceted awning that extends across the entire width of the stage, while the imaginative use of a common ironing board provides an assortment of exercise equipment.

If Robert Lepage has ever experienced an actual close encounter, those extraterrestrials would have undoubtedly been impressed by his genius.

The show has one performance in French on the 6th November, under the title La Face Cachée de la Lune.