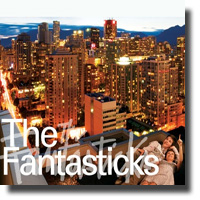 It’s often said in the spheres of sport and entertainment that you can’t argue with success and the success of The Fantasticks is legendary. Tom Jones (not the Welsh lounge singer) and Harvey Schmidt’s little piece of commedia dell’arte actually set a record for the world’s longest-running musical, with 17,162 Off Broadway performances between 1960 and 2002 at New York’s Sullivan Street Playhouse.

Perhaps its success lies in the simplicity of its universal tale. Sixteen year-old Luisa (Bree Greig) suddenly realises that she is grown up and is smitten by Matt (Colin Sheen) the boy next door, or it may be the other way round. Their respective fathers (no moms in this show) create a faux feud that entails building a wall between the gardens and forbidding the pair from seeing each other. They know that the lovers will find a way through or over the wall to each other’s heart. The cunning plot works, but then a good plan needs a better plan to abrogate it -- enter the flamboyant El Gallo (Steve Maddock). He arranges the kidnapping of Luisa with a pair of hired old actors (Christopher Gaze and Simon Bradbury) that is devised to fail, with Matt heroically defending his inamoratas against the contrived peril of El Gallo. The two fathers resolve their feigned feud and all ends happily.

But wait! This is only the end of the first act. The song that opens the second act, This Plum is too Ripe clues us in on the pending tribulations of young love with its cornball lyrics “What at night seems oh so scenic, may be cynic in the light.” Matt and Luisa learn from their experience that infatuation can be fickle and to rediscover love you first have to lose it.

Director Max Reimer, who also handles the choreography, artfully allows the audience to be part of the story-telling by asking that they invest emotion in the actors, who never leave the stage even when not involved in a scene, rather the characters. David Roberts’ deliberately cluttered backstage set helps generate the subterfuge of attending a dress rehearsal.

The youthful looking Bree Greig and Capilano College theatre graduate Colin Sheen turned in competent performances of the young lovers without being inspiring. Steve Maddock, who sings the show’s showpiece song Try to Remember, was larger-than-life as the swashbuckling El Gallo. Andy Toth as Bellomy (Luisa’s father) and Mark Burgess as Huckabee (Matt’s Dad) are right on target as punctilious parents and fretting gardeners.

Jeff Hyslop was simultaneously mime-master and shaman. His silent performance as the omnipresent mute was an absolute gem. Christopher Gaze, dragged away from Vanier Park to play faded Shakespeare thespian Henry, steals nearly every scene he is in. You can always rely on Gaze to bring an element of pantomime to his performance and together with his on-stage cohort Simon Bradbury, doesn’t disappoint.

Almost unseen at the rear/left stage, musicians Bill Sample on keyboards, Laurence Mollerup on bass and Albertina Chan on harp were certainly, and gratefully heard.

For theatre-goers who have come to expect musicals to be much edgier, The Fantasticks may be too saccharine. Nonetheless, it’s an ideal launch-pad for Vancouver Playhouse’s new season.