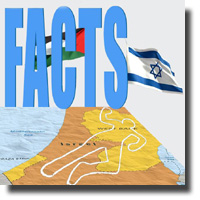 One of the most impressive features of Arthur Milner’s Facts—apart from the compelling case it makes that even irrefutable facts cannot guarantee that an accusation will result in a conviction---is its potential for sustained dramatic tension. The two lead characters are both involved in law enforcement, but this is where their commonalities end: Yossi HaCohen (Jerry Wasserman) is a liberal Israeli and a self-professed atheist; whereas, Khalid Yassin (Mehdi Darvish) is a Palestinian who is reluctant to express his religious beliefs. These officials form an uneasy bond as they attempt to solve the murder of an American archaeologist in the hotly contested West Bank.

Things get even more contentious when it becomes clear that their prime suspect is a Zionist settler named Danny Rakoff (James Gill) who fervently believes that the Palestinian West Bank belongs exclusively to the Jews. It seems this radical Zionist held a grudge against the murdered archaeologist because the archaeologist had published his views that there was no King David and that, furthermore, the Jewish people had never been in Egypt. The case is considerably more complex than this of course, and as the complexities unravel, so do the characters—especially Yossi, who seems to hold a particularly rabid antipathy towards the suspect.

It turns out that Yossi’s father was a Zionist, and it may be that Yossi is working out some deeply buried issues. Wasserman is in fine form as this seasoned detective. When interrogating Danny, his performance fluctuates between subdued disdain and a kind of sublimated malevolence. Apart from the physical abuse he so effectively inflicts upon his suspect, he manages to portray a barely controlled sense of intimidation. By adding a great deal of depth to a character who some critics have suggested strains the credibility of his credentials, Wasserman proves that he is an expert at making audiences believe what skeptics scorn to accept.

Mehdi Darvish’s Khalid Yassin is an intriguing foil to Jerry Wasserman’s Yossi HaCohen. Darvish’s portrayal has sensitivity and just the right amount of temerity without even the slightest hint of the stereotypical. He conveys a strong sense of respect and self-control throughout the interrogation scene, and even his gentle admonitions of Yossi are done in a tone that registers far more of self-deprecation than condescension. Yet he is always in command of his pride and his sense of place, and the audience cannot help but feel his very presence communicates a Middle-Eastern charm and charisma.

If there is one weak link in this play, it is the Zionist suspect. The playwright Arthur Milner said in an interview that this character was “hard to write.” Maybe that is why James Gill seems to find him so hard to act. While being interrogated, Gill decides to have his character mince awkwardly away from the two detectives, taking great pains to appear nervous and to avoid getting caught in between them. The trouble is, Gill looks like he’s trying too hard to appear nervous. That is, he tries to appear nervous right up to the point when he should be most nervous, and then he just adopts a ‘deer in the headlights’ surprised expression. Even when he is supposed to be at his most passionate while talking about how the Jews want all the land the Palestinians are contesting, Gill just comes off as unbelievably strident. It is admittedly, one of the most difficult roles to play, but Gill could have made his characterization far more plausible and far less deranged even if, say, he had channelled the emotions he felt while enacting Oscar Wilde in The Invention of Love – a role in which he incidentally seemed far more invested.

Perhaps the one stage element that makes this play so compelling is Andrew Pye’s excellent set design. Somehow managing to make Styrofoam and plywood look like a giant concrete slab, complete with rebar hanging out dangerously at odd angles, the stage has a menacing feel all its own. So three-quarters of the play contribute to make it a meaningful production. The Facts are: those are good odds.