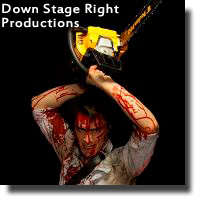 Evil Dead: The Musical cleverly spoofs the 80’s cult trilogy directed by Sam Raimi about five college kids who spend their Spring Break at an abandoned cabin in the woods. Best of all, this is a Canadian musical, first performed in Toronto. When this show debuted, it was dubbed “The next Rocky Horror show” and it has definitely achieved that status, if not surpassed it. DSR Productions did a “groovy” job remounting their 2009 performance five years later – better and bloodier than before.

Scott Walters was hilarious as over-the-top main character Ash, spouting one-liners from the films like “This is my Boomstick!” or “Good, bad, I’m the guy with the gun” that made the audience erupt in cheers. Meghan Anderssen was delightful as his girlfriend Linda, and their duet “Housewares Employee” was both humorous and touching. Jennifer Neumann delivered a strong performance as Ash’s quirky sister Cheryl, and clever props like her book “How to Survive Alone in the Woods” added to the production’s hilarity. Andrea Bailey impressed, sharing the roles of ditzy Shelly and intelligent Annie, and Ian Rozylo was entertaining as Ash’s offensive friend Scotty. Mat Baker stole the show as good old reliable Jake. Matthew Graham, despite not having many lines, used physical humour to make his presence known on stage. You have to love a musical that has an actor playing the role of “Fake Shemp” – which, in this case, meant Eric Gow got the fun part of playing decapitated corpses and more.

As one would expect, this is definitely a “PG” show and not recommended for kids due to bad language, sexual humour and on-stage violence. The musical has a similar cult-following to the movies, with adult men and women arriving in pre-splattered white shirts and eagerly sitting in the front row awaiting the bloodbath yet to come. While there were a few audio kinks on opening night that have likely been worked out since, this was an impressive and enjoyable evening out. Set designer John Bessette did a fantastic job re-creating a cabin (and several forest scenes) onstage. The intimate Norman Rothstein theatre is the perfect intimate location to experience this interactive production.

The climax of the show is definitely when the demons manifested to “Do the Necronomicon” – a hellish ceremonial ritual. If there is one must-see production to get you in the Halloween spirit, Evil Dead is it. It was a bloody good time.