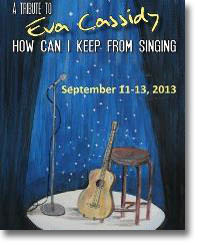 How Can I Keep from Singing: A Tribute to Eva Cassidy

I confess that I’m one of many who didn’t start listening to Eva Cassidy’s music until five years or so after untimely death through melanoma in 1996. After all, she was virtually unknown outside her native Washington, DC at that time. While the scope of her immense talent as an artist is not in question, it’s impossible to know if it were not for the tragedy of her early death, would she now be enjoying the celebrity status that she never sought in the first place.

Eva Cassidy didn’t write any of the music she sang and played. She is better known for arranging and interpreting; putting her signature stamp on other artist’s music and making them her own. Her vocal and guitar work on Gordon Lightfoot’s “Early Morning Rain” makes it, for me, the definitive interpretation of that song.

In Cayla Brooke’s musical theatre tribute How Can I Stop From Singing, Brooke celebrates the singer’s life in both musical and narrative form. With shoulder length platinum blonde hair and wearing a small black dress and high heels, the statuesque performer more closely resembles a young Peggy Lee (a role she has already played) than the diminutive Eva Cassidy. That is likely the reasoning for abandoning the original concept of Brooke playing the late singer in character.

Brooke wisely opts to perform as “herself” rather than impersonate her subject’s voice and style. She did however, step into the role of Eva in one of the show’s many poignant moments. Near the end of the show, entering on the stage in jeans, a woolen cap and walking stick, she re-enacted the late singer’s final performance. Propped up on a stool, she sings "What a Wonderful World" – supposedly, the last song Eva Cassidy sang in public.

Cayla Brooke gives a humourous, generous and reverential performance. She gets help from a talented four-piece band and a twelve member choir providing occasional back-up vocals. Local actor/singer Tom Pickett picks up the role of Eva’s former collaborator, R&B musician Chuck Brown. Pickett impresses in a couple of duets with the principle performer as well as a solo rendition of “Never Make Your Move Too Soon.”

How Can I Stop From Singing is presented as an intimate glimpse into the professional and personal life of Eva Cassidy. I wonder then, if the production might have been better suited to the more intimate space of the Studio Theatre rather than the 500 seat main auditorium.