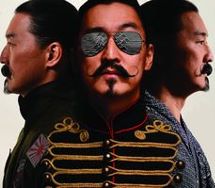 The Cultch & VACT
Empire of the Son

Tetsuro Shigematsu looks athletic in his black suit and bare feet as he enters the narrow, intimate stage of the Culture Lab. We realize that we are listening to a master storyteller when he confides in us about the recent death of his father, Akira Shigematsu, who died a month before the opening of Empire of the Son. Our storyteller goes on to confess, “I haven’t cried since I was a kid.”

Shigematsu explains that he never wanted to be like his father, Akira, an extremely shy, undemonstrative man of few words. Although Akira was privately reticent, paradoxically he was also at one time a CBC’s External Services radio broadcaster in Vancouver, telling stories about Canada to his far-away listeners in Japan. Despite all of their differences, Shigematsu finds himself as an adult also working for the CBC, when he begins hosting “The Roundup” radio program.

The shared bond of broadcasting allows Shigematsu to successfully interview Akira about many personal things during the last two years of his father’s life. They become so close that during Akira’s final days, Shigematsu would sometimes gently pick his father up to carry him. Shigematsu recounts, “I was at my strongest, when my father was at his weakest.”

During the show, images of small childhood toys are projected onto the back stage wall, as well as a wonderful photo of Shigematsu’s siblings all smiling together in a small bathtub. This creates a sense of shared family memories, while also giving the audience a chance to laugh. A humorous series of photos showing Shigematsu’s young son,Taizo, freely crying over many different things, including pulp he has found in his orange juice, proves Taizo is the first male to break the long line of stoic Shigematsu men.

Brilliantly written and acted by Shigematsu, Empire of the Son is a poignant and universal story about parents and children. With humour and honesty, he shows us how a son can gain understanding of himself through learning more about his father’s life. Shigematsu tells us with pride and admiration, “My father was a mountain, a force of nature. He was my waterfall.”