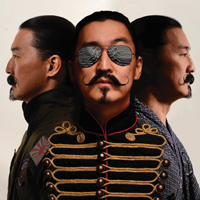 Tetsuro Shigematsu is a cultural critic, broadcaster, writer and performance artist. He is also Akira Shigematsu’s son (hence the nondescript title likely derived from the Steven Spielberg film) and a father to his children Taizo and Mika. His voice may be already familiar due to his job as the final host of The Roundup on CBC Radio One.

His solo show, remounted at the Vancouver East Cultural Centre (The Cultch) this week, offers homage to his father who died September 18, 2015, a month before the play’s original production opened. But it’s much more than an “after-the-fact” bio of one man’s complicated relationship with a parent who stubbornly holds on to ‘old country’ customs.

Empire of the Son is a poignant, bittersweet family story and an engaging theatrical experience that traverses across three continents. The elder Shigematsu was born in Kagoshima, Japan, but moved to London, England with his wife Yoshiko in 1969. Five years later, Akira, Yoshiko and their five children immigrated to Canada.

Except for a mutual bond of working as radio journalists with the Canadian Broadcasting Corporation (CBC) the younger Shigematsu claims to have shared little in common with his father. Tetsuro is cosmopolitan, Akira was a proud traditionalist, who even objected to being addressed by his given name.

Shigematsu enters the stage barefoot, wearing a dark three-piece suit, with two neckties, one white, one black, stuffed into the jacket pockets. This, we were informed is typical in Japan where men will wear the same suit for weddings and funerals.

Shigematsu occasionally uses a table mounted, sliding camera focused on miniatures to recount compelling anecdotes, with the results projected live onto a screen behind him. The performance is set in front of Pam Johnson’s set consisting of vertically parallel white slats that cross the width of the stage forming more of a wall than a fence.

There was a rare, non-scripted incident that interrupted the artist’s reading of a personal hand-written letter in which the father finally accepts the son on an equal footing. A power outage half way through the show necessitated a brief evacuation of the building. When the audience returned to their seats, Shigematsu made light of the incident and restarted by reading the letter again from the beginning.

Superbly written and performed, Empire of the Son is a universal story about parents and their children who can become separated by culture. And yet, the play demonstrates how a son can gain understanding of himself by learning about his heritage.