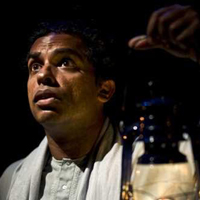 Jacob Rajan walks out in a loose white cotton garment, with his buckteeth calling attention to his humble position as Kutisar, a chaiwallah (tea seller) in the Bangalore railway station. The only other person on this stage is Adam Ogle, the guitarist, who sits quietly in a corner on a stool. Somehow this low wooden platform covered by a large, colorful rug, surrounded by beautifully shaped screens, transports us to faraway India.

As Kutisar’s story unfolds, other characters appear to us through his expert storytelling and imaginative acting, highlighted by the dramatic stage lighting. Where there was once only one character, we now meet the seven beautiful sisters who have been abandoned by their father after their mother’s death. The sisters all begin to sing beside Kutisar’s chai tea stand, with the youngest sister Balna stopping everyone in the train station for a full five minutes by her beautiful voice. When thugs try to steal the money kind strangers have left for the sisters, Officer Punchkin, an honest cop, comes to their rescue.

The Elephant Wrestler has its roots in the Indian fairytale “Punchkin”, but this contemporary version takes place in a modern India filled with criminal danger, as well as new cultural arrivals such as Starbucks and iPhones.

There is a lot of humour in the storytelling, such as when Kutisar announces, “You go to sleep in your 20s, but wake up in your 50s.” He proceeds to shine a bright flashlight into his own face, while clicking it off and on, “Day. Night. Day. Night.” At the end of his epic story, Kutisar, holds out an empty teacup and tells us that our problems are our own. “Your life is a cup. Fill it with what you want.” The audience applause that follows is strong and heartfelt.

During the post show question and answer session, Rajan, who has created 17 different characters on stage, walks out smiling with his perfectly straight teeth. He explains that this play was first performed in New Zealand in people’s living rooms, something more like early man’s storytelling in small caves. Because Indian Ink Theatre Company is touring around the globe, their props fold up and can all be stored in five bags. For an audience, this show is like a dazzling, whirlwind ride on a magic carpet!