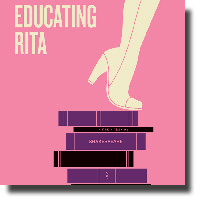 British playwright Willy Russell's two-handed comedy Educating Rita is a protégé-mentor story that owes much to George Bernard Shaw’s Pygmalion. Frank is an Open University professor, jaded and world-weary, who hides bottles of whisky behind the volumes on his bookshelves. His lack of success as a writer has made him cynical as a teacher.

Rita is a 26-year-old hairdresser who yearns for a better understanding of the arts. Her desire to get out of the pubs, where she spends most of her current leisure time with her boorish husband and into the theatre brings her to Frank’s English Literature class in the Open University programme. Rita’s natural curiosity and eagerness to learn initially amuses Frank, and then intrigues him, restoring his ability to teach.

The play’s premise is predictable enough that you soon realise the teacher learns more from his student than he imparts. The audience sees Rita transform with each scene, from a streetwise homebody to an informed scholar of Yeats, Blake and Chekov. I liked the effect of Rita’s fashion style that changed with her appreciation of literature.

Scott Bellis gives a committed performance as the oft inebriated academic. His melancholic take on the role provides a perfect foil for Rita’s big personality.

Holly Lewis’s portrayal of the proletariat Rita is everything you would want her to be: candid, clever and colourful. I did have a problem getting past her faux Scouse (Merseyside) accent though. To me, it sounded like she was auditioning for a role on Coronation Street.

Despite the play running about fifteen minutes too long, Sarah Rodgers maintains a lively pace. The two things that slow it down are the episodic nature of the production (some short scenes are just a few minutes duration) and Scott Bellis going through his costume changes on stage.

Drew Facey’s set takes the form as Frank’s university office with hordes of books – some in shelves, some on the ground. The unpretentious and comfortable space provides an effective combat zone for the characters clashes – both personal and professional.

Willy Russell's commentary on the British class system may well be outmoded, but Educating Rita is still good for a few laughs and excellent entertainment.