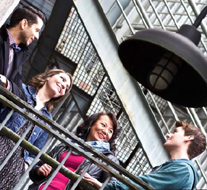 This production company established in January 2015 opens its doors with this mini-musical, a contemporary song-cycle about four adults examining and asking questions about the meaning of life. The musical was written by Pasek and Paul in 2005 when they were 19-year-old undergraduates in musical theatre at the University of Michigan, and it became a hit and has had hundreds of productions all over the world.

It's a good musical, short and sweet (only an hour and 20 minutes), and the talented and experienced performers (Devon Busswood, Adam Charles, Sharon Crandall and Brandyn Eddy) did a good job singing and dancing (although there was only one dance at the end of the show). Kudos to the actors and to Director Ian Harmon and especially the band composed of Peter Abando, Jasmin Khangura and Colin Parker.

I'm glad more musicals are being produced in Vancouver. I think producing musicals is a challenge to actors who today need to know how to act, sing and dance. And from the audience's point of view, this is entertainment at its best when you see a good musical and have good actors, singers and dancers perform well, like this show.

I look forward to more of these types of musicals, and I wish the company the best of luck in their next productions. This musical production will surely be nominated for the next Ovation awards.