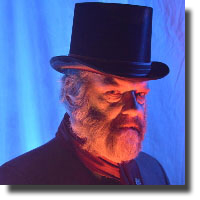 The sight of three ghoulish ghosts together on stage introducing the play’s narrative provides a perspective closer to a Tim Burton creation than Charles Dickens. Aside from the play’s redemptive arc, which never gets compromised, it’s as distant a departure from Dickens’ original Christmas Carol as it’s possible to get.

It’s a ‘spirited’ caper (sorry, bad pun), that creates theatrical illusions to give the illusion of atonement. In terms of style, design and Daniel Deorksen’s original score, the show clearly attempts to bridge Dickens’ time with the present.

We all know the story. Scrooge is visited by four ghosts: Jacob Marley, Christmas Past, Christmas Present and Christmas Yet-to-Come. In David Newham and Daniel Deorksen’s version, the visitations are concomitant – the three ghosts get to haunt poor old Ebenezer in his bedroom at the same time.

Andrew Wheeler delivers a nuanced performance of the cantankerous miser; wonderfully gruff in the earlier scenes, but appropriately perplexed when haunted by the spirits. Scrooge doesn’t even recognize his own heartlessness. All he expects from his employee Cratchett is a good day’s work for as little as he can get away with paying. Furthermore, he doesn’t consider himself especially wealthy.

This production is a darker version, taking on the macabre elements of this Christmas classic. On Saturday afternoon, the building was as frigid as Scrooge’s heart. I’m not sure if the lack of heat augmented the show’s ghostly theme or not, but if you go and see Ebenezer – and I would recommend that you do – take a warm coat.