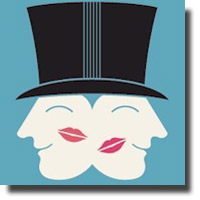 David Mackay directs an able and affable cast in the Arts Club Theatre’s most recent incarnation of The Importance of Being Earnest. In his programme notes, he writes that “every character in this play is brazenly smart.” This is true insofar as it relates to the principal actors, but less so with respect to the minor characters, particularly Reverend Chausible and Miss Prism. To start with these two characters is to highlight the foibles of Wildean caricature. Wilde is merciless in his satire of the clergy in this play, and Simon Bradbury invests a good deal of mock piety into his portrayal of the good reverend, who must barely mask his libidinous desire for Miss Prism. A truism for satire is "go big or go home." Satire thrives on exaggeration. Hence one of the funnier sight gags of the play involves Miss Prism getting a grip on her admirer’s watering can.

More critical to the main movement of the play than the good reverend watering flowers, however, are the figurative masks that Algernon Moncreiff (Charlie Gallant) and Jack Worthing (Ryan Beil) create. These masks are actually personas. They are created in order to deceive the objects of their affection, Cecily Cardew (Ella Simon) and Gwendolen Fairfax (Amber Lewis), respectively. The four principal actors inhabit their roles with an energy and commitment that is every bit as big as the sets designed by Amir Ofek. We’re talking oversized. Go big or go home.

Beil is his usual animated self, and he brings his customary robust, worldly-wise innocent flourish to Jack Worthing’s scoundrel-with-a-conscience, milking the audience for laughs right up to his final titular line.
Gallant plays Moncreiff with a flippancy and fervour that all but melts down the sangfroid of his character, often bouncing around the gigantic set pieces like a toy soldier on speed. In fact, the set pieces, top hat, beauty mirror, flowers, all seem designed to make all the characters look like toys.

Amber Lewis’s Miss Fairfax is either a proper marionette, arms akimbo in caricatures of romance or a prancing and preening ingenue whose up-and-coming-socialite pretensions lead her into direct and unexpected conflict with Miss Cardew. At times Ms. Lewis seems intent to prove that catty women are a lot like dogs, in that their snarl is far worse than their bite. The têtê-à-têtê between Fairfax and Cardew is worth the price of admission, again larger than life, and every bit as big as the set pieces.

Perhaps the show stealer, though, is Allan Zinyk’s turn as Lady Bracknell. Mr. Zinyk pulls out all the stops in his portrayal of this matronly member of high society. In a fearless and feckless foray into high camp, Zinyk mingles agile athleticism (as I said, these set pieces are immense) with august pronouncements and avuncular visitations of a purely mercenary nature.

Were Wilde less circumspect about issues of moral rectitude (and I speak ironically here), one might well expect his characters to find no excuse to cavil about society and the church, but as this satirical cast of The Importance of Being Earnest proves, any excuse will do nicely. And the bigger, the better. No small performances, please. It’s satire.