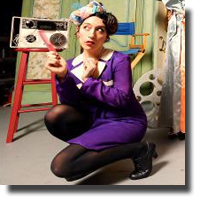 The Scarlet Queen of Mercy, written and directed by Kat Single-Dain, in collaboration with the cast, is more complex and entertaining than a three-ring circus. In fact, the audience is at centerstage and all the other scenes are in a sensurround mode--five stages surrounding us. We had to turn our chairs facing the stage where a particular scene was taking place.

Single-Dain is into the circus environment, having studied in clown school and involved in all kinds of festivals and extravaganzas. Her last production with Dusty Flowerpot was Hard Times Hit Parade, another theatrical spectacle dealing with the Depression-era dance marathons.

I like circuses, and in the past, I reviewed shows by Cirque du Soleil. The circus ambience of this production is present as we are transported onto the set of a 1955 movie, a film noir but in Technicolor, with chorus girls dressed in glitzy costumes as they sing and dance in a cabaret. The set is replete with 1950s heavy film gear, cables and all, which was still in existence upto the 1990s..

This is a cast of almost 100, including production staff who also get involved in acting, as they prepare the set, move cameras and cables, etc. Another aspect of this "circus" is improv. Each performance is unique with audience participation. On opening night, extras were picked from the audience to play various roles, like Waiter, Kidnapper, Police, etc.

The audience enjoyed this show as I did, because everyone had fun and got involved actively in the show. We were told to shout "Quiet on the set!" before a scene was shot. The singing was good, as well as the dancing. Special Kudos to the star of the show, Jack Garton, who plays director/star of the movie. He sang, danced and acted, just like those stars of yore, Gene Kelly and Fred Astaire. Other major actors are Patrick Kearns, the Assistant Director; Karly Warkentin, the femme fatale. a Rita Hayworth type who plays the star showgirl in the cabaret; and there were fine performances by Candice Roberts, Nathan Barrett, Fergal McSwiggan, Deanna Knight and Raina von Waldenburg.

Opening night was jam-packed, and if you like extravaganzas, improvs and circuses, this is a must-see show.