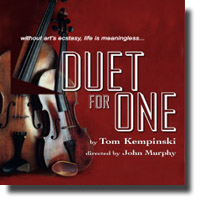 United Players
Duet for One by Tom Kempinski

Tom Kempinski’s award-winning play, Duet for One is unusual. Not only is the stage occupied by only two characters for the entire performance, but the subject is uncomfortable and deep, yet at times strangely witty.

Duet for One takes us into the mind and emotions of a renowned musician facing the stark realization that her sparkling career must end due to the onset of multiple sclerosis. The play is essentially a series of psychiatric sessions between Stephanie Abrahams, an internationally celebrated violinist, and her psychiatrist, Dr. Feldmann. As the play unfolds, we watch Stephanie deal with the implications of her condition, not only for her career, but for her marriage and her sense of meaning. She rails against the questions and suggestions offered by a firmly grounded Dr. Feldmann about areas in her life that she might examine. The audience watches spellbound as the therapist metaphorically pokes Stephanie with a stick to see what her reactions will be. Those reactions are sometimes surprising for both characters.

It is a tribute to the direction of John Murphy and the acting talent of Alison Raine and Graham Bullen that the audience could be swept so far and so convincingly into character. A major challenge is to create physical interest in sedentary therapy sessions so that they can work on a stage. Murphy, a Jessie-winning actor, producer and playwright achieves this by ironically directing the disabled patient to do most of the moving. Occasional uncomfortably long periods of silence between patient and therapist also work to heighten tension.

A strongly convincing portrayal by Alison Raine carries the audience into the depths of confusion and conviction that characterize Stephanie. With strokes both bold and subtle, Raine takes us on an exciting, painful and joyful journey into devastation and discovery as Stephanie tries to come to terms with the life that she has been dealt.

Graham Bullen’s considerable talent is evident in making Dr. Feldmann come to life as a credible interesting character that can match the power of Stephanie’s personality. His portrayal of a stubbornly calm, seemingly dispassionate therapist, intent on prodding and frustrating Stephanie into action, brings little sympathy for the character early in the play, but scores admirably as the play unfolds, and as he steers Dr. Feldmann to reveal himself more fully.

The technical aspects of Duet for One are beautifully crafted. Kudos to all involved for making the set, lighting, sound, and costuming authentic, workable, appropriate and pleasing. This United Players rmounting of Duet for One brings to its audience a glimmer of understanding of the passion of artists, and it reveals the subtle treacheries in the enormous adjustments brought on by the onset of devastating disease. For a thought-provoking evening of finely crafted theatre, see this play.

Duet for One is a compelling theatrical exploration of the evolution of a complex relationship between a psycho-therapist and his patient. Graham Bullen underplays Dr. Feldmann with a rare blend of exasperating stillness and deliberately muted poise. His psychological strategy appears to be to act as a kind of emotional stalking-horse, and his true purpose only emerges by degrees over a series of gradual, at times aggravatingly unfeeling unveilings. This play is worth seeing for many reasons. Go to be entertained by the sparks that fly between a buttoned-down, conventional psychiatrist and his vivacious handful of a patient. Go to get a sense of the unflinching view it affords of bravery. But perhaps most importantly, go to get an honest and candid look at what is involved in probing beneath the surface of the psyche to get at the raw feelings and ideations that inhibit personal growth in the face of severe limitations.

Alison Raine shines in her role as Stephanie, a gifted young concert violinist who has recently been diagnosed with Multiple Sclerosis. My wife, who has struggled against this insidious disease for several decades, accompanied me on the night of the first dress rehearsal of this excellent play, and she remarked that Ms. Raine provides an incredibly accurate portrayal of someone afflicted with MS. Beyond these purely physical aspects of the performance, however, Ms. Raine also brings her character to life with considerable depth of emotion, a wide range of associative reflections, a scathingly cynical sense of humour, a wilful determination and a brash, indomitable spirit. Ms. Raine’s Stephanie more than holds her own against Graham Bullen’s admirably insufferable Dr. Feldmann.

Director John Murphy has created an impressive, almost symbiotic dynamic between these two actors that can only be described with scientific understatement—Raine and Bullen have a rare chemistry. The mix is sometimes frothy, sometimes explosive, but always simmering with potential that is most fully realized when it is most volatile. My considerable experience with Multiple Sclerosis has helped me to understand that there is always much more going on beneath the surface that one can fully appreciate with a merely superficial glance. This play paints a penetrating picture of two courageous souls who dare to delve deeply into the often painful recesses of the human heart.

Music is at the core of the heart of this play as much as the debilitating disease with which Stephanie must come to terms. One of the quotes projected upon the wall during the play was attributed to Bob Marley, and it suggests that music mitigates pain. The fact that she is no longer able to play her violin because of her MS makes Stephanie a double victim. Yet her indomitable resolve to ‘handle’ her disability on her own terms turns out to be the real challenge that both her and the good doctor must face head on in a relentless search for truth. Ultimately, you will want to go to see Duet for One because it provides an authentic and bracing look beyond the face of fallibility into the soul of vulnerability, and it does this with as close an approximation of infallible theatrical precision as you are likely to encounter.