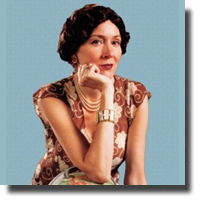 The Duchess A.K.A. Wallis Simpson by Linda Griffiths

The late Duchess of Windsor, will always be known to the world as Wallis Simpson. Even though she was born Bessie Wallis Warfield and was only married to Ernest Simpson for ten years (roughly the same length as her first marriage to Winfield Spencer), yet was married to the Duke of Windsor (Edward VIII) for thirty-five years until his death in 1972.

Through Diane Brown, the actor who plays the notorious Mrs. Simpson in her play, Linda Griffiths gives her the spirit, personality and sex appeal that no one, save for the Prince of Wales himself, believed she had. But the late Canadian playwright (she died of breast cancer six months ago) feels that the Duchess has been vilified for far too long and must have been more than “the Yoko Ono of her time.” Hardly gifted with conventional beauty, breeding or charisma, she surely must have had something going for her to beguile the heir to the British throne to abandon his destiny.

The Duchess a.k.a. Wallis Simpson is offered up more as a revue than a documentary. Although, many of the vignettes used in the play, though grossly exaggerated, hold to some historical fact.

The beleaguered Mrs. Simpson was often the object of (probably unfounded) criticism for what some conspiracy theorists suggested were Nazi sympathies. Der Führer, played with cartoonish zeal by Matt Reznek, actually features in the play.

The story is set somewhat curiously inside the premise of the duchess's jewellery collection offered on auction to the audience. This requires the device of removing that fourth wall that invisibly separates actors from the audience.

Noël Coward (Xander Williams) is another famous fictionalized figure injected into play, but as both musical narrator and one of Simpson’s social cronies. Williams is able to deliver on Coward’s foppish suaveness, but his piano playing overwhelms his singing – which may not be an entirely bad thing.

Diane Brown and Craig Erickson front wonderful chemistry as Wallis and Edward. There is palpable affection and clear contrition between them.

Michael Bock’s stylish set is remindful of Miami south beach art deco with side pillars, central sliding doors and a grand piano at stage right. Mara Gottler’s sumptuous clothing is certainly evocative of time and place in 1930s London. The single anomaly is Diane Brown’s flat black “hospital shoes.” No doubt to compensate for Ms. Brown’s height (the real duchess was about seven inches shorter at a petite five-two) – still an odd choice though.

Director Sarah Rodgers handles the production with just about the right amount of respect for playwright’s work and the correct tone of irreverence for the sordid saga.