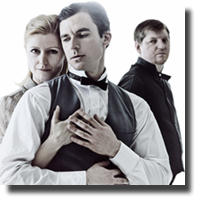 It would be oversimplifying it if I were to say that The Duchess of Malfi is all about a young widowed Duchess whose two brothers—a prince and a cardinal—are dead set against her marrying again and that they seek a gruesome vengeance upon her after she falls in love with one of her servants, marries him clandestinely, and subsequently bears him three children. There are vast amounts of political intrigue at work in this play, there are spying rogue courtiers aplenty, and there is treachery enough to choke more than a few bloated plots.

Sadly, pacing problems and underdeveloped characterization issues mar what might otherwise be a robust and vitally cathartic play. On more than one occasion it appeared that Ferdinand (Paul Herbert) was reciting lines rather than reinventing his character, and he was not the only actor mouthing the lines.

The cardinal (James Gill) on the other hand proves himself as the more Machiavellian of the two brothers right up until he gives away his diabolical secret in a scene that runs counter-intuitive to his ‘true’ character.

Despite what director Tariq Leslie suggests about family honour being the true motive for the vile vengeance these two brothers wreak upon their paragon of a sister, one cannot help but feel there were more mercenary motives at work. Entitlement issues and inheritances seem more likely at stake here.

The Duchess of Malfi (Alison Raine) is portrayed with skill, finesse and elegance. Unfortunately there seems to be next to no chemistry between her and Antonio (Adam Bergquist), the object of her affection. There is little by way of exposition prior to the Duchess’s sudden come-on and Bergquist portrays Antonio as a bit a milquetoast, a factor that goes a long ways towards undercutting a fair bit of the Duchess’s credibility.

By this logic, the cardinal and his noble brother Ferdinand ought to be pitying rather that punishing their sister. Such are a few of the many plot faults of this ponderous and problematic play. At two hours and three quarters, it perhaps felt more ponderous than even this convoluted script warranted. It is a bloody play, but it could have used more passion in the playing of it.

Darren Hales’ lighting is about right for the morbid mood of this macabre little piece of Jacobean theatre, and the costumes of Chanel McCartney and Shelby Page are both authentic and artistic.

It would be remiss of me to end without mentioning how impressive a madman Kazz Leskard makes. His crazed gaze and fitful rambling monologue when the fit came upon him as the madmen were loosed upon the Duchess, was as chilling a representation of lunacy as has been seen in the theatre on this side of the dark side of the moon.