Theatre under the Stars 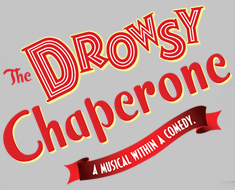 Ah, Musicals. I have to admit I’m not usually one who can stomach the saccharine folly and frivolity of musicals, but since The Drowsy Chaperone is so tongue in cheek (it’s really a parody of a musical), I can genuinely say I loved it. Actually, it’s described as “A musical within a comedy,” meaning it’s a play about an unnamed man who plays the audience a record of his favourite musical, which then comes alive in his living room. The musical action itself is paused and spliced throughout with the man’s wry commentary, and the English Literature student in me was won over by his analysis and dissection of this popular form of theatrical performance.

"The man” is played by Shawn Macdonald, who does a marvelous job of delivering a deconstruction of the plot, identifying the most silly parts of musicals, giving us just enough personal tidbits to be relateable without making the show too much about him. His comedic delivery is on point when he begins the show with a sardonic prayer of sorts (“Please God let the actors not come into the audience… I didn’t pay good money to have the fourth wall come crashing down”).

As for the ensemble of the musical itself, there was more talent on stage than my eyes could focus on; it was difficult to know where to look during the more rousing numbers where all 28 members of the cast were singing and dancing on stage. Particularly eye catching was Shannon Hanbury as Janet Van De Graaf, starlet turned bride-to-be, and Stuart Barkley, her groom-to-be.

If it is possible to have a handsome voice, then Barkley’s voice as Robert Martin is the most handsome voice I’ve ever heard. Barkley himself is also not terrible on the eyes, and one of my favourite numbers was “Cold Feets” where Barkley and Blake Sartin as George (the best man) tap dance across the stage pretty impressively.

Hanbury’s highlight as Janet comes as she takes questions from reporters and gushes that she “doesn’t want to show off no more” whilst bringing obvious attention to her majorly impressive vocal chops and numerous comic encores.

The orchestra, conducted by Music Director Kevin Michael Cripps, also deserves much praise as does Cripps. From nimble notes to dream-like flute parts, the musicians ably kept the story afloat and powering forward until the end.

Whether you are a musical lover or hater, you will enjoy The Drowsy Chaperone. It’s both an homage and light-hearted critique of musicals that’s sure to entertain both sides of the camp. It’s also a Canadian-born musical celebrating the 10th anniversary of its original incarnation. Additionally, the open air venue of Malkin Bowl in Stanley Park is such a lovely venue with its backdrop of tall evergreens set in early evening but quickly turning to dusk at intermission, thus a word to the wise – the mosquitos come out in full force around dusk and it does get chilly, so don’t forget to bring your blankets and bug spray.