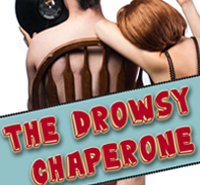 EXIT22
The Drowsy Chaperone by Bob Martin and Don McKellar

The Drowsy Chaperone is a musical inside a comedy (or perhaps it’s the other round). As the Man in the Chair, Theo Budd is the centrepiece of the production. He arrives home to his apartment feeling a little blue. So, he does what he usually does to cheer himself up, settle down with a ‘cuppa’ and comb through his collection of vinyl records, eventually coming across his personal favourite, The Drowsy Chaperone performed by the original cast. The fourth wall is removed as his nostalgic anecdotes and satirical commentary take us back to a glamorous musical from the “Roaring Twenties,” when, as he recalls, “a gay wedding was just a wedding with fun.”

When the Man in the Chair drops the stylus gently onto the black vinyl, his nondescript apartment is magically transformed into a glitzy theatre stage. The show filches the old ‘freeze-frame’ device where actors remain perfectly motionless whenever the Man in the Chair interrupts the record playing to dole out clever chitchat.

Student productions are renowned for performers having as much on stage as the poeple sitting in the audience. This mounting of The Drowsy Chaperone, directed with a sure touch by Gillian Barber, doesn’t seem to be an exception. The show is really a parody of American musical theatre that Broadway is famous for. The production uses pretty much every corny cliché that one might expect like: over-the-top production numbers, counterpoint duets, romantic moonlight in the middle of the day and of course, breaking into song in the middle of a conversation.

The musical’s premise is charming in its simplicity. Broadway star Janet Van De Graaf (Kate Blackburn) and her besotted fiancé Robert (Stuart Barkley) are the whimsical lovers, who end happily in predictable fashion. Janet deciding to quit show business and get married means trouble for impresario Fieldzieg (Benjamin Purych), owner of the Feldzieg Follies. He has promised the producers to have Janet in his next show, so he tries to sabotage the wedding. Then there is the frequently inebriated chaperone (Paige Fraser) whose job it is to safeguard Janet’s virtue until the actual wedding.

Despite his youth, Theo Budd looks a natural as the Man in Chair. His comic timing is right on the mark and even nonchalantly slips into some of the show’s routines. The likable Stuart Barkley and his best man Oliver Castillo make a great comedy duo and together display some dazzling ‘tap’ with “Cold Feet.”
Bride-to-be Kate Blackburn and titular chaperone Paige Fraser also have super synergy. Both girls get the opportunity to show off their vocal talent. The perky Ms. Blackburn in particular looks to have a promising future as a triple-threat artist. She stops the show with her rendition of the show’s better novelty songs, “I Don't Wanna Show Off no More.”

This improbable production works due to the efforts of a rambunctious young cast of theatre arts students, who have pulled together an ambitious and high-spirited show.