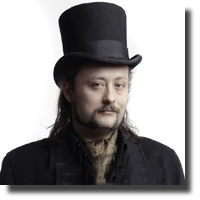 For the past five years, we have been reviewing productions by this company, and what is most interesting about it is it is innovative, fresh and challenging. It challenges the norm with experiments like this musical, a piece unheard of. Artistic Director Mooney in his notes mentions APPLAUSE's Artistic Director Scott Ashton Swan as his inspiration to experiment on unknown or little heard of musicals like this one.

This musical by Tony Award-nominated Rupert Holmes is rooted in Charles Dickens’ bleak Victorian novel, but the author turns it into a fun and festive British cabaret/panto/melodrama where there's the villain, John Jasper (Alexander McMorran), a Jekyll-and-Hyde choirmaster who is madly in love with his student, Miss Rosa Bud (Jennifer Doan), who is, in turn, engaged to Jasper’s nephew, Edwin Drood (Sarah Wolfman-Robichaud). Drood disappears mysteriously one stormy Christmas Eve—but has Drood been murdered? And if so, then whodunit?

In his programme notes, Mooney mentions that there are more than 400 possible endings to the"whodunit", as this novel was never finished due to Dickens' demise. What's enjoyable about this "mystery" is the audience is asked who they think murdered Drood. And the fun begins. Like a Victorian melodrama/panto, the audience boos and hisses at the villain. The cast members from beginning to end mix with the audience. Comic actor/acrobat Chris Lam came up to me before the show started, shook my hand and introduced himself. The audience loved and laughed at his performance on opening night.

Every night, there's a different murderer, which makes this musical half-improvisational. Again, a new approach, a digression from the norm of Broadway-type musical. Just as New York has its off-Broadway shows, community theatre in Vancouver is its equivalent, where amateurs start off after graduating from school, especially Capilano University where there's a major in Musical Theatre, and naturally, the well-know Studio 58 Professional Acting Programme.

All the actors were fabulous, especially Princess Puffer (Linda Leong Sum) who won the hearts of the audience. McMorran got a lot of boos and hisses; Doan, the love object, was pretty and innocent ... well cast! Wolfman-Robichaud playing a male role did her role well. And last but not least, professional actor Jack Rigg as the Narrator/Mayor was just right for the part.

Choreography by the indefatigable Dawn Ewen, taking a lot of moves from Chorus Line got a lot of yeahs from the audience; costumes by Cathy Wilmot were true to the Victorian era; music director Vashti Fairbairn (piano) conducted in style the other orchestra instrumentalists Renee Bulat, Alison Darton, Graham Clark, Boyd Grealy, Andrea Minden, Adrian Smith and Mark Whitmore.

Stage Management by Aliya Rozenberg must have been hellish with a cast this big. Set Design by Keita Selina was simple but faithful to the Victorian-type of panto/burlesque theatre; and Lighting by Mark Eugster was well-designed, especially those roving spotlights, typical of lighting in the days of yore.

There's always something surprising when Ryan Mooney comes up with a show. So expect something different when the next unknown or never-heard-of show Grey Gardens comes to the Jericho May 1-19.