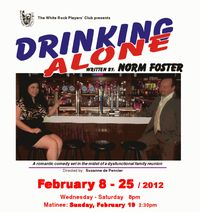 This romantic comedy by prolific Canadian playwright Norm Foster about a dysfunctional family reunion was received warmly by yesterday's matinee audience at the Coast Capital Playhouse in White Rock. Directed by Susanne de Pencier, the actors made the audience laugh with Foster's funny punch lines, and at some soments, especially that moment when Ivan (Roger Currie) hugs his daughter Carrie (Sarah Green)--that moment indeed brought a tear or two from some spectators.

Veteran actor Roger Currie was terrific as the mean ol' dad, but with a heart of gold. I like his strong vibrant voice which came across well, especially for most of the seniors in the audience with hearing problems. His wife Phyllis (Sheila Keating) as the always- positive character acted her role well as the charming second wife of Ivan. Sarah Green as Carrie plays her part to the T as the daughter with the drinking problem like her deceased mother, and having marital problems, as she and her husband are getting a divorce.

Joe (Terry Thomas) is well cast as a loser who doesn't have any fun, a boring and uninteresting person. But Thomas plays his role well by not being boring and uninteresting in the play. Renee (Vanessa Klein) plays the part of an escort service girl hired by Joe to impress his dad that he finally found a pretty girl to marry. The audience enjoyed her nervous verve, and before Joe's dad arrives, he tells her to say as little as possible about their supposedly six-month relationship. However,she finds it difficult to stop herself from talking and making up detailed lies about her background. Klein creates some of the play's funniest moments as she creates fantasies about her relationship with Joe.

This is a fun show and a great cast, and shouldn't be missed at all, especially for those living in the White Rock area. The play will run till the 25th..