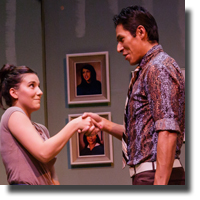 Dreary and Issy are Deirdre and Isabelle Monoghan, two sisters whose parents have just perished in a moving vehicle accident and are now left alone to care for themselves. Deirdre (Dakota Herbert) is well-adjusted and responsible, though lacking in street smarts. Isabelle (Roseanne Supernault) is a pretty, joyful child in a young woman’s body. Born with fetal alcohol spectrum disorder (FASD), her intellectual development is severely stunted. Although a year younger, it now falls on Deirdre to be the primary caregiver to her sibling, a native Blackfoot, adopted by a white Catholic family shortly after she was born.

Tara Beagan has set her story in the mid seventies, when it was first acknowledged by medical authorities that heavy alcohol consumption during pregnancy could have such a tragic effect on the fetus. In his programme notes, Jovanni Sy implied that the production is not an “issue play.” Nonetheless, I’m unable to share that observation with Gateway’s artistic director. Ms. Beagan, herself part aboriginal (Ntlakapamux), does however, cloak the play’s message in character dialogue rather than in the narrative arc. But issues of FASD and adoption of Native children by white families are central themes.

Beagan, who also directs, allows the pace, particularly in the first act, to be almost pedestrian. The action moves into a higher gear in the second half of act two, but overall I found the pace uneven. The director informs the audience by using a couple of clever devices. At opposite ends of the play, each of the sisters provide a telling monologue: Isabelle opens with a heartfelt oration on how her life could have been. Deirdre, at the end, recounts a disastrous final twist in both their lives. In separate instances, Mrs. Harper (Sharon Bakker) and the two girls slip out of ongoing telephone conversations, to continue speaking directly in the same room. The device instills a heightened sense of exigency.

Dakota Herbert and Roseanne Supernault deliver fine performances as Deirdre and Isabelle, Particularly, Supernault who is fearless as the unfiltered epileptic sibling. Versatile actor, Garret C. Smith does his best in what seems an awkward role of Freddie Seven Horses, a vacuum cleaner salesman and potential suitor for Deirdre. His rant about the native children being assimilated into white Catholic families appeared to run against his previously established character. Sixty-year-old Sharon Bakker, the only non-aboriginal cast member, is solid in support and provides the play's lighter moments as the stereotypical Mrs. Harper.

Aside from its weighty issues, Dreary and Issy also delves into the positive mores of sisterhood, self-sacrifice and devotion to family.