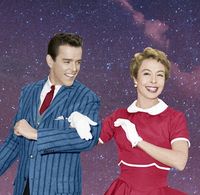 Patrick Street Productions
Out of a Dream by Rodgers and Hammerstein

Conceived and directed by Peter Jorgensen, who in his programme notes says that "this production was to create a loving tribute" to the two icons of musical theatre, this musical revue draws from each and every show written by this duo, with songs from their popular musicals Carousel, The Sound of Music, Flower Drum Song, State Fair, South Pacific, The King & I, Oklahoma! and other not so popular musicals such as Allegro, Me and Juliet and Pipe Dream.

Most of these musicals I first watched as a child in the 50s in movies. I remember Shirley Jones and Gordon Macrae in Carousel, with that popular classic "You'll Never Walk Alone" and also that very long "Soliloquy" which was wonderfully rendered by Warren Kimmel; Julie Andrews in The Sound of Music, Yul Brynner and Deborah Kerr in The King and I and Rosanno Brazzi in South Pacific singing "Some Enchanted Evening".

The beautiful Kazumi Evans was also awe-inspiring with her superb singing of the opening song "Out of My Dreams" and I enjoyed Caitriona Murphy's "It Might As Well Be Spring". Kaylee Harwood's rendition of "I Enjoy Being a Girl" was delightful, and Sayer Roberts' "Lonely Room" was quite moving.

There was only one piece that was out of place because it was sung by two males when in fact it was originally sung by a man and a woman: "We Kiss in a Shadow".

All five singers were excellent, to the point of perfection, reaching those high notes superbly. The musical accompaniment by the orchestra composed of Sean Bayntun (Piano), Marisha Devoin (Double Bass), Alicia Murray (Percussion & Vibraphone) and Nico Rhodes (Woodwinds and Reeds) was beautiful.

Kudos to Peter Jorgensen and the production staff for this wonderful tribute to the great Rodgers and Hammerstein!