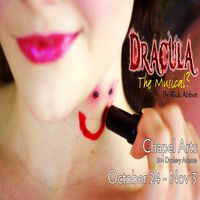 This bunch of post-secondary actors did a tremendous job acting and singing in this satire based on the classic Bram Stoker horror tale. Good entertainment for Halloween! But what caught my attention the most were the fabulous costumes created by Debbie Wiecke. Her slogan is "I make neat stuff", and indeed, she did a fabulous job with the costumes.

Xavier de Salaberry (Count Dracula) did a great job satirizing Dracula, and Ranae Miller (Mina Seward) was excellent with her melodramatic gestures reminiscent of 19th century acting. She is the love victim of Dracula who has three and not two punctures on her neck. Dracula explains that the other one was done by a giant mosquito in his castle.

Andrew Wade (Dr. Van Helsing) portrayed the eccentric Dracula hnter with his garlic and wooden stakes in his bag. He was screaming throughout the show (my eardrums almost burst!) and gesticulating wildly like a madman. He was playing the role well, but maybe he should bring down his volume a few decibels. Chelsea Powrie (Bubu Padoop) was delightful as the sexy actress running after Van Helsing.

Claire Rice (Sophie Seward) got her laughs with her tics and Adam Weidl (Dr. Sam Seward ) fit to the T as the Administrator of the Sanitarium. Sean Sager (Boris Renfield) dressed in a straightjacket, got his laughs as he burst out in song and dance whenever phrases uttered by the other actors sounded like states of the USA. And last but not least, Erika Babins (Nelly Norton) had a good Romanian accent acting as the maid and also was the Dance Captain of the group.

Congratulations to Director/Musical Director Andy Toth and Choreographer Cara Tench for a job well done. This musical premiered on Broadway in 2004 and only had 154 performances receiving mostly negative reviews.