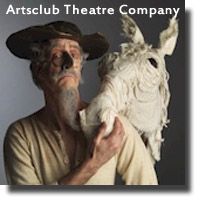 In collaboration with Axis Theatre Company
Don Quixote
by Colin Heath and Peter Anderson. Based on the novel by Miguel de Cervantes

This production is superb in all its aspects: the adaptation of the Cervantine novel, the acting, the set design, the music...In 2010, when it opened at the Granville Island Stage, it received accolades and great critical acclaim. It's now on tour till February 7th, and I watched it on openng night at the Surrey Arts Centre last January 17th. The audience was thrilled and delighted with the picaresque satire Cervantes intended it to be.

This adaptation is not the romantic Broadway and Hollywood type of musical popularized by Man of La Mancha. Instead, it is the novel put into theatre, into the farcical comedy it was meant to be. In fact, I strongly recommend that this play be re-translated to Spanish and that it tour Spain, Mexico and South America. I'm almost certain it will be received with warmth and enthusiasm in these countries where Cervantes is considered the genius that Shakespeare is in the English-speaking world.

I enjoyed the acting which was ribald, vigorous and clever: the talented playwright/actor Peter Anderson as Quixote looked and acted exactly as the errant knight with "the woeful countenance", and Michel Perron as Sancho physically looked and acted the part of the down-to-earth squire. The supporting actors who played multiple roles gave a certain meatiness and variety to the play: Sasa Brown as Antonia, Raphael Kepinski as Samson Carrasco, Marco Soriano as Father Perez, Beatrice Zellinger as Teresa, and Allan Zinyk as Doctor Nicolas.

The set design by David Roberts was innovative, giving the impression that we were reading from the pages of this classic novel; the original music by Robert Buckley brought us to Spain with his stereophonic sounds of guitars and trumpets. Sheila White's costumes were just right for the period; and last but not least, Melody Anderson's masks gave that certain uniqueness in this production, as it did with her mask designs in the long-running Axis production of The Number 14.

Kudos to the playwrights Colin Heath and Peter Anderson for a unique adaptation, and to director Wayne Specht for delivering an amusing production enjoyed by the Surrey audience on opening night.