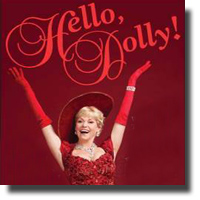 When you have a classic musical like this that has a fabulous score and dance numbers, plus seasoned actors who play the lead (Colleen Winton and David Adams), and naturally, a veteran director/choreographer (Valerie Easton), you're sure to have a hit. That's exactly what happened during the first matinee performance of this show last Sunday. The audience was smiling all throughout, and they stood applauding during curtain call.

Another feature in this family-oriented show is it's meant for all ages. In fact, the large cast was composed of actors of all ages, from children to seniors in the ensemble, singing and dancing. What wonderful performers! So far, this has been the best show I've seen presented by RCMT. It has been presenting musicals at the Massey Theatre for the past 23 years. This its 67th musical.

The production was indeed extravagant The costumes were fabulous, andI was truly impressed. Chris Sinosich is well-known in the lower mainland for her costume designs. Colleen Winston had so many costume changes that I practically lost count. But what got the audience really impressed and applauding was when she came out with that dazzling red dress. Wow! That was really pretty.

The music was superb. James Bryson conducted the orchestra flawlessly, and the scene design by Omanie Elias was just wonderful and exquisite.

But of course,what got the soul of the show going was Mrs. Dolly Gallagher Levi (Colleen Winton). There was that naturalness about her acting and singing that made the matinee audience feel comfortable. Winston is not only a fantastic actor, but a great singer. She will surely be nominated for a Jessie for her performance as Dolly. David Adams as Horace Vandergelder is a classic actor and has a beautful singing voice. His rendition of "Hello Dolly" when he proposes marriage to Dolly at the end of the second act was simply moving. Caitlin Clugston as Mrs. Molloy was operatically splendid. Boy, can she reach those high notes!

I also enjoyed the Kids' Chorus composed of Keira Jang, Kallista Jones, Trevor Kobayahi, Julia MacLean, Jada McKenzie, and Nathan Plasecki. I was with my granddaughter and whenever the kids came out to sing and dance, she had all eyes on them. The supporting cast was full of energy. Dustin Freeland as Cornelius, the love interest of Mrs. Molloy; Sayer Roberts as Barnaby, Kayla Dunbar as Minnie Fay, Nilsen Tienfenbach as Ambrose Kemper, Stefanie Liatopoulos as Ernestina, and Ken Irwin as Rudolf. What terrific acting, singing and dancing!

This is a show that shouldn't be missed. So hurry and get your tickets. You won't regret it.