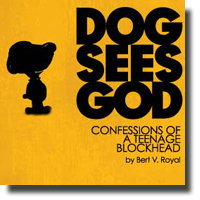 Like many regular followers of Charles M. Schulz’s syndicated comic strip “Peanuts,” I occasionally imagined what would happen to Charlie Brown, sister Sally, Linus and Lucy Van Pelt, Peppermint Patty, Marcie, Schroeder and Pigpen if they were allowed to grow up. Bert V. Royal has evidently been taken by the same notion, but unlike the rest of us he has acted on his vagary in developing this disquisitive play with its curious palindrome title: Dog Sees God.

Royal’s scenario advances Schulz’s perennial third-graders by roughly ten years which effectively puts them in their senior year at High School. Playful pastimes like keeping a kite in the air and winning a baseball game have given way to darker issues such as homophobia, bullying and drug and alcohol addiction. As in Schulz’s original narratives, there is no “adult” participation, so, it’s left to the kids to resolve their own conflicts.

Royal’s characters are not nearly so lovable as the originals, so not surprisingly, the work has never been endorsed or sanctioned by the Schulz estate (Schulz himself died in February, 2000) or the United Features Syndicate. But despite the cryptic (and legally necessary) aliases the character inferences are blatant. And just in case anyone in the audience missed the affinity, Vince Guaraldi’s definitive recording of the “Charlie Brown Theme” was played with almost annoying regularity during scene shifting.

The language and persona of the beloved “Peanuts” gang was frozen in time around the sixties or seventies. However, director Style Dayne has brought this mounting right into the present decade, so that some of the characters personalities are radically altered.

"Good grief," the all-purpose response to Charlie Brown’s frustration with life has been substituted by rather more colourful expletives. Despite acceding to the edgier dialogue, Jeff Todd turns in a nuanced sad-sack performance consistent with the character's unique foibles. His confusion over the loss of his pet beagle (the name Snoopy is never mentioned) manifests itself into examining his own sexual identity. “Chuck’s” exploration into homosexuality may not be so difficult to accept to avid readers of the original comic strip, considering his dismal failure with the “red-haired girl” and the abuse suffered at the hands of the bossy Lucy.

The most drastic identity shift is with Matt (read Pigpen). Cole Matthew (or is it Matthews?) gives a wound-up, slightly over-the-top performance; trading insouciant innocence for a homophobic, sociopathic demeanour. C.B.'s little sister (read Sally Brown) also gets an anomalistic personality make-over. The once carefree and untroubled kid (played with a quirky edge by Courtney Paige) is a social outsider indulging in offbeat performance art.

Dylan Riches is enigmatic as the brooding loner Beethoven (read Schroeder) who might be the play’s most complex character. Even in Schulz’s comic strips, Schroeder, constantly hunched over the keys of his toy piano, was acknowledged as the most detached of the “Peanuts” gang.

I would have liked to have seen more of Montana Norberg who makes a second act appearance as “Lucy” now confined to a Psychiatric hospital for setting fire to the red-haired girl’s hair. “Linus” (Eric Banerd) is a pothead who has exchanged his security blanket for recreation drugs. Therés Amee and Andrea Bucko provide many of the play’s lighter moments as Tricia and Marcy (read Peppermint Patty and Marcie).

Already longer than it needs to be, the choppy pacing and the clumsy props shifting between scene changes make the show seem even longer. The play only works when it emulates Schulz’s thought-provoking humour. Unfortunately, it loses direction when it attempts to probe our psyche through shock factor.